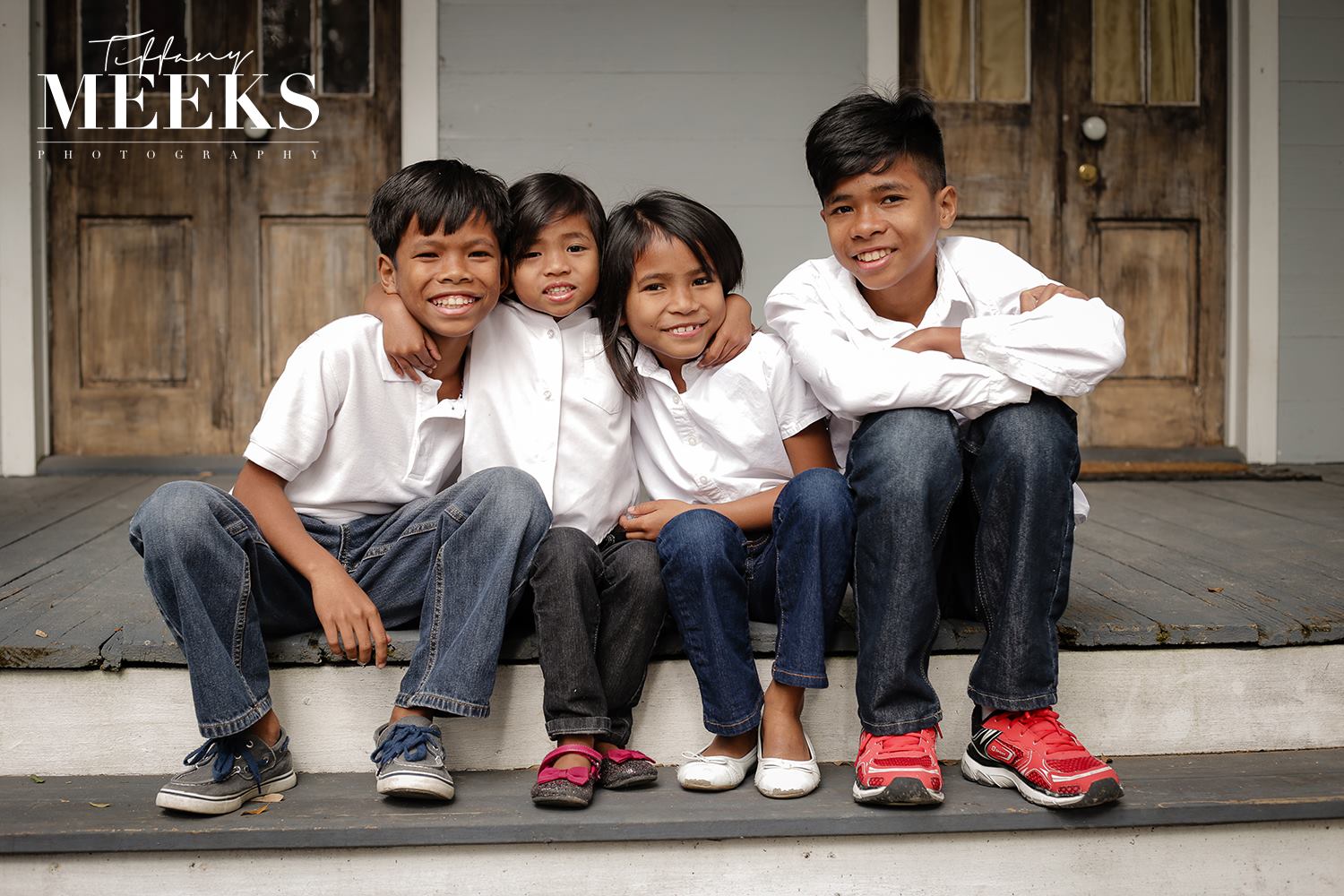 1 Corinthians 2:7-9 But we impart a secret and hidden wisdom of God, which God decreed before the ages for our glory. None of the rulers of this age understood this, for if they had, they would not have crucified the Lord of glory. But, as it is written, ”What no eye has seen, nor ear heard, nor the heart of man imagined, what God has prepared for those who love him”

We had just found out the glorious news that day.

It was early Thursday morning when the phone rang. Of course I missed the call running around like a crazy woman getting things ready for the start of Hope Extreme’s summer program, but I quickly listened to the voicemail saying “Detiveaux family, we have good news for you, please call us back as soon as possible.”

We had been waiting for what seemed like an eternity for that one phone call.

It was early February 2015 when we had picked a sibling group of four children (yep you read that right…four) two boys and two girls out of hundreds of children listed in the Philippines adoption list. Before you begin to think of us as absolute crazies, four was NEVER in the plan.

We started trying for kids after two years of marriage (and though I had a later start in marriage at thirty two,) I was pretty confident that having children would not be a problem after all my sister popped out four in five years so no worries. I still remember the first time taking a pregnancy test after being off of birth control just waiting confidently for that double stripe to appear. But it didn’t’ happen. And not only did it not happen, it never happened.

There are a lot of things to say about infertility, but one thing I promised the Lord was that if He ever allowed me to marry, I would never fuss about being barren. I knew the verse well in Isiah saying "Sing, barren woman, you who never bore a child; burst into song, shout for joy, you who were never in labor; because more are the children of the desolate woman than of her who has a husband," says the LORD. I always had children around me but oh how I desired for my own and that promise that I had made to Him in my singleness was getting harder and harder to keep two years into the process. My nerves were unraveling, my emotions were pouring out all over the place and my doctor wanted to start the process of finding out exactly what was wrong.

But I just couldn’t handle it, and I can handle a lot (a whole lot) of things. When the doctor mentioned it I started crying. Not just minimal crying but the broke down sobbing in the heaving kind of way that gets all nasty and slobbery, full of hurt and pain.

I was an absolute mess so we decided against it. We were going to adopt.

Before we had even gotten married we had mentioned that in the plans but always knowing that it would be after we had our own. A few months before we had taken our first mission trip with our young church plant and were able to stay at the parent’s house of a family that attended our church. Every day we were surrounded by children in the neighborhood coming to watch the strange Americans. And we were a strange mixture for sure, but the children were drawn especially to my Husband and that is where little Barisa captured our hearts. She would come for the food but would stay for the love. She would sit on my husband’s lap and listen to my broken Spanish stories and songs learned from mission trips past. We knew that her family was not taking great care of her so the last night my husband had me and our translator walk over to that one room shack and offer to help in any way needed. But it was not to be.

However, our hearts had been touched and we were ready.

So, we started the process and chose the Philippines anxiously looking for that sibling pair of two that would become our forever family. The email with a picture list of kids came early in the morning and our agency told us that we had to decide on the picking of our children by three o clock. Three? A life changing decision by three. So anxiously I scrolled down the listings and about halfway through I saw them.

Four of them. Two boys and two girls and my heart was drawn. But we had to make a decision that day and my husband was at work. Quickly I emailed the lists to him so that we could discuss it over his lunch break. At twelve he called with the listing of only one sibling group that he was drawn to…the same group of four.

Surely, we were crazy. Zero to four is crazy. But Ted was confident and honestly, I was just scared, so I muttered under my breath, “God if this is you, I need to hear the number four, and I need to hear it today.” Mailing in the proposal my mind swirled with the absolute craziness of it all.

Our day was packed and Ted met me at the church for bible study that night with our small community of believers. Barely catching our breath or telling anyone of what we had just done, our discipleship classes started. I was teaching a group of ladies and I’ll never forget as Tammy, one of our neighbors from the community raised up her hand with four fingers pointing straight up. “Four, you are going to have four. Two boys and two girls.”

I stopped dead in my tracks. The Lord had heard my “under my breath” prayer. He had answered through Ms. Tammy a new convert, how very like Him (our marriage story is very similar). And so we waited. Waited for the Philippines to give us the word that we were fit to be these kids forever family.

But it was nearing the end of May and still no word.

And that brings me back to the phone call. Shaking, I called our agent back to only reach her voicemail. A game of phone tag was on with the weight of four children’s’ lives hanging in the balance. Or perhaps the unthinkable might have happened…they called my husband first. How could they? Didn’t they know I had completed most of the paperwork? They were supposed to call me first.

So, I called him, but he had heard nothing also. (a huge sigh of relief)

The minutes ticked as I anxiously waited for the news that we so badly wanted to hear. Finally, the phone rang again. This time I didn’t miss it and our agent excitedly told us that the kiddos that we had prayed for would soon be a part of our forever family.

During the months of waiting for the news I had been following (all right stalking) the children’s orphanage on Facebook. They looked so different in real life as compared to their mug shots that the adoption agency had given us. Imagine your driver’s license picture but in black and white and a full body shot, just coming off the street as scavengers. We had found pictures of our youngest celebrating her birthday with her older sister. Another one was posted of our oldest headed off to camp for a week during the beginning of his summer. As soon as we heard the news that day, I prayed a short prayer under my breath, “God let them post a picture of one of our kids today.”

That night as I got home from work, I anxiously checked the page and there she was, our answer to months of prayer.

A picture of our youngest. All by herself.

I wanted to like her picture a thousand times over.

Her deep brown eyes were staring off in the distance with a look of longing. This was the clearest picture that we had of her yet and she had festive flowers painted all over her face from a group that was helping at the orphanage that day. Though her face was filled with artwork, her stare was pensive. Saddened and brooding.

Her picture already had over one hundred likes (as it should) and comments were starting to build, but it was the first one that grabbed my heart.

“She needs a forever home.”
I gently whispered “she has one.”
I wanted so badly to comment on the comment.
She has one.
She is ours.
We are going to be her forever home.

But I couldn’t. We were clearly instructed by our adoption agency that morning although the children were loosely ours we could not post anything on social media about them or show their pictures off in any of our newsfeeds or the like.

And that is the heartbeat of Paul when he writes to the church at Philippi. In chapter three he states  “Brothers, join in imitating me, and keep your eyes on those who walk according to the example you have in us. [18] For many, of whom I have often told you and now tell you even with tears, walk as enemies of the cross of Christ. [19] Their end is destruction, their god is their belly, and they glory in their shame, with minds set on earthly things. [20] But our citizenship (forever home) is in heaven, and from it we await a Savior, the Lord Jesus Christ, [21] who will transform our lowly body to be like his glorious body, by the power that enables him even to subject all things to himself.”

Other versions say our commonwealth (DBT), business (AB) and conversation (KJV) is in heaven. What a concept that Paul was trying to remind the church. Everything is in heaven.

This world is not our home, but heaven is. And, because our citizenship is there, our conversation is there and we are to keep up correspondence with it. The life of a Christian is in heaven.

I fully believe that most people don’t often think about heaven. They often don’t think about the place that Jesus is still establishing for us. If we did, we would do life differently.

Though the end of Philippians 3 is clear that Heaven is our destination. Jesus is fulfilling the assignment of preparing heaven as stated in John 14:1-3 “Let not your hearts be troubled. Believe in God; believe also in me. In my Father’s house are many rooms. If it were not so, would I have told you that I go to prepare a place for you? And if I go and prepare a place for you, I will come again and will take you to myself, that where I am you may be also.

Many people give up on that assignment because it is too hard, too involved, doesn’t produce results, takes longer than we wanted and the list can go on and on. We lose sight of our forever home because we are distracted by our earthly ones.

But we have to make more citizens. It’s the commission that Jesus left us with.
Today be a part of adding to the “eternal” forever family.
Because there are more than four kids that need to know. God Bless.

You are More than Valuable

When Salt Loses it Saltiness