13 No temptation (test) has overtaken you except such as is common to man; but God is faithful, who will not allow you to be tempted beyond what you are able, but with the temptation will also make the way of escape, that you may be able to bear it.

But does this scripture mean that God won’t give you more than you can handle?

Let’s look at the word temptation:

Adversity, affliction, trouble sent by God and serving to test or prove one's character, faith, holiness.  God is not the author of hardships and disasters, but He allows them for our good.

So often we have heard the expression that God does not give you more than you can handle.

Is that truth or is it just a cliché?

I want to look at some examples in the bible of Godly men who seemingly had too much to handle.

Our first example is the man Job.

8 Then the Lord said to Satan, “Have you considered My Servant Job, that there is none like him on the earth, a blameless and upright man, one who fears God and shuns evil?” 9 So Satan answered the Lord and said, “Does Job fear God for nothing? 10 Have You not made a hedge around him, around his household, and around all that he has on every side? You have blessed the work of his hands, and his possessions have increased in the land. 11 But now, stretch out Your hand and touch all that he has, and he will surely curse You to Your face!” 12 And the Lord said to Satan, “Behold, all that he has is in your power; only do not lay a hand on his person.”

Job was minding his own business, going about his day as usual.  When suddenly everything in his life unravels.

The Sabeans came and invaded, taking his oxen, donkeys, and killing Job’s servants.

Fire of God came down and consumed all the sheep and more servants.

Chaldeans came and invaded, taking his camels and killing more of his servants.

Great wind came which collapsed a house in which Job’s children were staying, and they all died. Job then declares

“Naked I came from my mother’s womb, and naked shall I return there.
The Lord gave, and the Lord has taken away; Blessed be the name of the Lord.”

22 In all this Job did not sin nor charge God with wrong.

Up to this point Job seems to have weathered the storm.  It appears that God has not given him more than he can handle. However, chapters 2 and 3 are coming. In chapter 2 satan has permission from God to touch Job’s health.  Job is then given very painful boils. In chapter 3 vs 11 we see that it was more than Job could bear as he is basically asking God to kill him.

This test was too much for Job to bear. Maybe you can relate to Job.

I wish I could tell you that everything becomes rosy and peachy when you get saved, but I would be lying.  There will be times in your life that you will be given too much to handle.

I also wish this only occurred with one man in the bible, again I would be wrong.

This happened with many men in the bible, including the man Moses.

God had just brought His people out of Egypt with a strong and powerful hand, showing them many strengths of His great power.  God had chosen Moses as an instrumental part of His great plan. As they were on their journey to the promised land, they began complaining of the manna that God had sent for them to eat.  They were desiring the meat and fish that they had back in Egypt.

10 Moses heard the people weeping throughout their clans, everyone at the door of his tent. And the anger of the Lord blazed hotly, and Moses was displeased. 11 Moses said to the Lord, “Why have you dealt ill with your servant? And why have I not found favor in your sight, that you lay the burden of all this people on me? 12 Did I conceive all this people? Did I give them birth, that you should say to me, ‘Carry them in your bosom, as a nurse carries a nursing child,’ to the land that you swore to give their fathers? 13 Where am I to get meat to give to all this people? For they weep before me and say, ‘Give us meat, that we may eat.’ 14 I am not able to carry all this people alone; the burden is too heavy for me. 15 If you will treat me like this, kill me at once, if I find favor in your sight, that I may not see my wretchedness.”

Just like Job, Moses was to the point in which he desired death and he states plainly that the burden was too much for him to bear. That really puts a damper on the cliché “God won’t give you more than you can handle.”   Wasn’t Moses a man of God and a man of faith?  Maybe you heard that your faith is not strong enough if you face such trials.  That is simply not true either.

How would you like to oversee over a million people that did nothing but complain against you and against your God?

Moses also was given too much to handle

One more of countless examples, his name was Elijah.

Elijah was a powerful man of God.  He was a prophet who was tired of God’s people following after the false god baal, while at the same time claiming to be God’s people. He challenges the 450 priest of baal to a showdown.  Whatever God answered by fire, He was God.  After an all-day pathetic failed attempt by the prophets of baal to call down fire, Elijah calls upon the name of the Lord our God and fire came down from heaven.  It consumed everything.  Elijah also had the prophets of baal executed. Then God sent the rain, and the famine was over.

1 Ahab told Jezebel all that Elijah had done, and how he had killed all the prophets with the sword. 2 Then Jezebel sent a messenger to Elijah, saying, “So may the gods do to me and more also, if I do not make your life as the life of one of them by this time tomorrow.” 3 Then he was afraid, and he arose and ran for his life and came to Beersheba, which belongs to Judah, and left his servant there.

4 But he himself went a day's journey into the wilderness and came and sat down under a broom tree. And he asked that he might die, saying, “It is enough; now, O Lord, take away my life, for I am no better than my fathers.”

His heart was torn, he was zealous for God and for His laws but the rest of Israel were not.  Anyone who has done ministry at one level or another can relate to this.  Your one desire is that people would connect to their Heavenly Father and walk according to His ways. When you see them walking in direct opposition or even defiant to His ways, that has the potential to make you feel like your work is in vain.

Then to make things worse his life is threatened by this wicked queen named Jezebel.  It was too much to for him to handle.

These three great men of God, were given more than they could handle. Their burdens seemed to be so overwhelming that they desired death.

At times, God will indeed give you more than you can handle.  But it is to bring us to a point where we need Him.

If you could handle it, then you would not need God.

(Personal story of God giving more than I can handle)

The good news is that, in all three of these men, their story does not stop at their desire to die.

Their story does not stop at God giving them too much to handle.

When it was too much to handle, they cried out to the Lord, and He heard their prayer.

6 Humble yourselves, therefore, under the mighty hand of God so that at the proper time he may exalt you, 7 casting all your anxieties on him, because he cares for you.

Each of these great men of God found themselves in a place which was more than they could handle.  What we find in each of these stories is that they cried out to God and He gave them sufficient grace to endure.

Now, let’s look back at

13 No temptation (test) has overtaken you except such as is common to man;

but God is faithful, who will not allow you to be tempted beyond what you are able, but with the temptation will also make the way of escape, that you may be able to bear it.

But God is faithful and will not allow you to be tempted or tested beyond what you are able. Then obviously that means He sees something else that you are not seeing.  If you find that you have been given more than you can handle, you are in a great place for God to do something amazing in your life.

When you have been humbled by the burdens of life then you are in the perfect position to be lifted up.

Job would have to endure in his trial a bit longer but eventually everything that he had lost was restored to him and even more than he lost was also given to him. What helped him to hold on, the grace of God

Moses would still have to lead God’s people to the promised land despite all their complaining, yet God gave him the grace that he needed to do so. Moses would go down in history as one of the heroes of the faith in the book of Hebrews.  He was also in spirit form along with Elijah during the transfiguration of Jesus.

Elijah would still be used by God in a great way,

He too was given sufficient grace to do so.  It was not over for these men as God still had a plan for their lives.

So, does God give us more than we can handle?  Absolutely, But it is ultimately to bring us to a place of humility and dependence on Him.  As we humble ourselves and pray, He gives us sufficient grace to get through.

You may have been given more than you can handle. If so, then you are in the perfect place for God to do something amazing in your life.  Even if you must endure the trial a bit longer like these men, God will give you the grace to get you through. 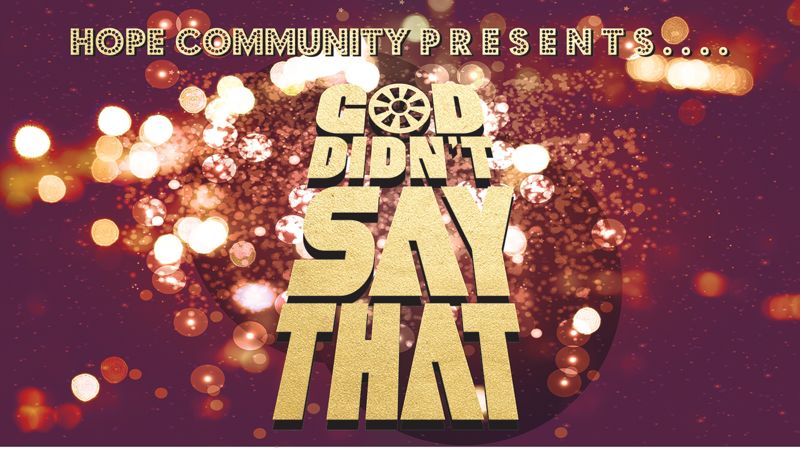 More in God Never Said That

What You Do, Matters

God Just Wants Me to Be Happy