You're More Than Fish Food

Theme: Surrendering to Your purpose

If we reflect on the story of Jonah, we find a man attempting to run from the presence of the Lord.  As we have learned, you can run but you cannot hide, God will always find a way to bring you right back to your purpose.

God met Jonah with a violent storm.  The storm was so great that the mariners cast lots to see who was responsible the storm.  The lots fell on Jonah.  He was thrown into the sea and immediately the storm calmed down.

But it did not end there.  God had arranged transportation for Jonah to bring him back to his purpose. This transportation we know to be a great fish which swallowed Jonah alive. It was an act of Grace from God to allow Jonah to live, when he deserved to die for his rebellion, and it was grace to give Jonah a second chance.

Last week we learned to embrace the process that God uses in bringing us to repentance.  In Jonah’s case God used a large fish to bring him to the end of himself.  Perhaps you have experienced an end to yourself. You should be thankful for the process and don’t waste the fish.

1 Then Jonah prayed to the Lord his God from the belly of the fish,

Jonah finally gets it right.  It took being swallowed by a great fish for him to realize that:

Jonah was humbled.  His attempt to run from the Lord had failed.  Now he finds himself in the belly of a whale, he is left with no other options but to cry out to the Lord.

Perhaps you have been there, maybe you’re there now.  You have exhausted yourself doing things your own way only to get nowhere.  If so you are in a great place for God to do something miraculous in your life. Humble yourself and cry out to Him just like Jonah did.

2 saying, “I called out to the Lord, out of my distress, and he answered me; out of the belly of Sheol I cried, and you heard my voice.

It says that God heard and answered Jonah’s prayer. What a merciful God we serve. Even though it was curtains for Jonah meaning it was all over, he cried out to the Lord and He heard Jonah’s prayer.

There is no where we can go to escape God’s love. When it seemed to be impossible, when he felt like he was too far gone, God heard his prayer.

It does not matter how far you have fallen, even if you have fallen into a lonely, dark, prison like surrounding, God will hear your prayer if you call out to him.

35 Who shall separate us from the love of Christ? Shall tribulation, or distress, or persecution, or famine, or nakedness, or danger, or sword?

38 For I am sure that neither death nor life, nor angels nor rulers, nor things present nor things to come, nor powers, 39 nor height nor depth, nor anything else in all creation, will be able to separate us from the love of God in Christ Jesus our Lord.

There was no depth of the Mediterranean Sea that Jonah could go where God would not find him.  God knew where he was the whole time. God was waiting and anticipating the moment in which Jonah would repent, and when he did, God heard his prayer.

God knows where you are, He knows what you are going through.  He has even watched as you try to escape your reality.  Yet He will incline His ear to you if you humble yourself in prayer.

3 For you cast me into the deep, into the heart of the seas, and the flood surrounded me;
all your waves and your billows passed over me.
4 Then I said, ‘I am driven away from your sight; yet I shall again look upon your holy temple.’
5 The waters closed in over me to take my life; the deep surrounded me; weeds were wrapped about my head
6  at the roots of the mountains.  I went down to the land whose bars closed upon me forever; yet you brought up my life from the pit, O Lord my God.
7 When my life was fainting away, I remembered the Lord, and my prayer came to you,
into your holy temple.
8 Those who pay regard to vain idols forsake their hope of steadfast love.
9 But I with the voice of thanksgiving will sacrifice to you; what I have vowed I will pay.
Salvation belongs to the Lord!”

10 And the Lord spoke to the fish, and it vomited Jonah out upon the dry land.

The Lord spoke to the fish.  Now this is interesting.

In the beginning when God created the world,

28 And God blessed them. And God said to them, “Be fruitful and multiply and fill the earth and subdue it, and have dominion over the fish of the sea and over the birds of the heavens and over every living thing that moves on the earth.”

Man was made to have dominion (rule) over the fish of the sea.  But we find the fish dominating (ruling) over Jonah.  The fish was totally in control as it went where it wanted.

Jonah had no control over where the fish was taking him. He describes his whale experience as being behind bars and being stuck in a pit. Jonah admits to being driven away from the presence of the Lord. This great fish was taking him where he did not want to go.

Sin will do that.  So many times, we think that we can control our sins or our addictions. Yet that thing that you were supposed to be in control of or have dominion over will be in control of you if you yield to it.  It will drive you further away from the presence of the Lord, more than you intended to go.  You will find yourself helpless and out of control as Jonah found himself.

But vs 10 of chapter 2 says that the Lord spoke to the fish.  Meaning this.  There is a God who is greater.  His words come with the authority of heaven.   When He speaks things happen. Planets are formed at the sound of His voice. Just because you failed Jonah, at having dominion over the fish, does not mean that God fails.  God never fails.  When He speaks to the great fish it has no choice, it must obey, and it does.

It is amazing to me this fish was more obedient to God than Jonah was. The fish recognized the voice of its creator and listened the first time while Jonah on the other hand did not.

If the Lord can speak to a fish, which was Jonah’s prison, and the fish obeys Him, Can He not speak to your prison?

Can He speak to that thing that has kept you bound, sucked the life out of you, driven you away from God and ultimately away from His purpose for your life?  He most certainly can, and He will if you ask Him.

You were created to dominate (rule) over sin.  Don’t let sin dominate over you.

10 And the Lord spoke to the fish, and it vomited Jonah out upon the dry land.

Far be it from us to be like everyone else who has been swallowed up by worldly desires.

As children of God we are called for a greater purpose than being fish food. We too are made in the image and likeness of God.  We too have been given a commission to go.  The world cannot have you.  If you run to the world, our prayer is that the world will vomit you out and bring you back to dry land just as Jonah was brought right back to his purpose.

He was Jonah which means “a dove” and his purpose was to go to Nineveh.

Nineveh was his purpose.  After reading this story one may think that He was named wrong.  He certainly was no dove.  But let me show you how even his name applied to his purpose.

In the story of Noah, a dove was released, after the flood, to find land.  It came back carrying a freshly picked olive leaf meaning it had found land.  This dove symbolized an end of God’s judgement and hope of a brand-new start.

Not only was the judgment of God subsided toward Jonah as He gave him a fresh start, God was still wanting to use Jonah to preach to Nineveh, so that they would repent and God’s wrath would subside toward them so that they too could have a fresh start.

Thank God that He is a God of second chances.

saying,2 “Arise, go to Nineveh, that great city, and call out against it the message that I tell you.” 3 So Jonah arose and went to Nineveh, according to the word of the Lord. Now Nineveh was an exceedingly great city, three days' journey in breadth. 4 Jonah began to go into the city, going a day's journey. And he called out, “Yet forty days, and Nineveh shall be overthrown!”

It wasn’t a long drawn out sermon which Jonah preached to Nineveh, basically he went around declaring that Nineveh was doomed.

God gives Nineveh a forty day chance to turn from their evil ways.

The Lord is merciful and gracious, slow to anger and abounding in steadfast love

5 And the people of Nineveh believed God. They called for a fast and put on sackcloth, from the greatest of them to the least of them.

They felt the weight of their sins.  They realized that their sins had offended a perfect, holy and righteous God.  True repentance is to feel the weight of our sins knowing how it hurts the heart of God when we rebel against Him.

6 The word reached the king of Nineveh, and he arose from his throne, removed his robe, covered himself with sackcloth, and sat in ashes.7 And he issued a proclamation and published through Nineveh, “By the decree of the king and his nobles: Let neither man nor beast, herd nor flock, taste anything. Let them not feed or drink water, 8 but let man and beast be covered with sackcloth, and let them call out mightily to God. Let everyone turn from his evil way and from the violence that is in his hands. 9 Who knows? God may turn and relent and turn from his fierce anger, so that we may not perish.”

10 When God saw what they did, how they turned from their evil way, God relented of the disaster that he had said he would do to them, and he did not do it.

You might have messed up big in your life just like Jonah, you might have a ton of regrets, and boat load of disappointments.  You might feel like you have failed God and that He will never love you nor does He have any use for you.

You were created to be more than fish food.  Meaning, don’t get swallowed up by the world around you.  Be different than the world fulfil your God given purpose. Be a sign to others that God is wanting to do something new in them as well. 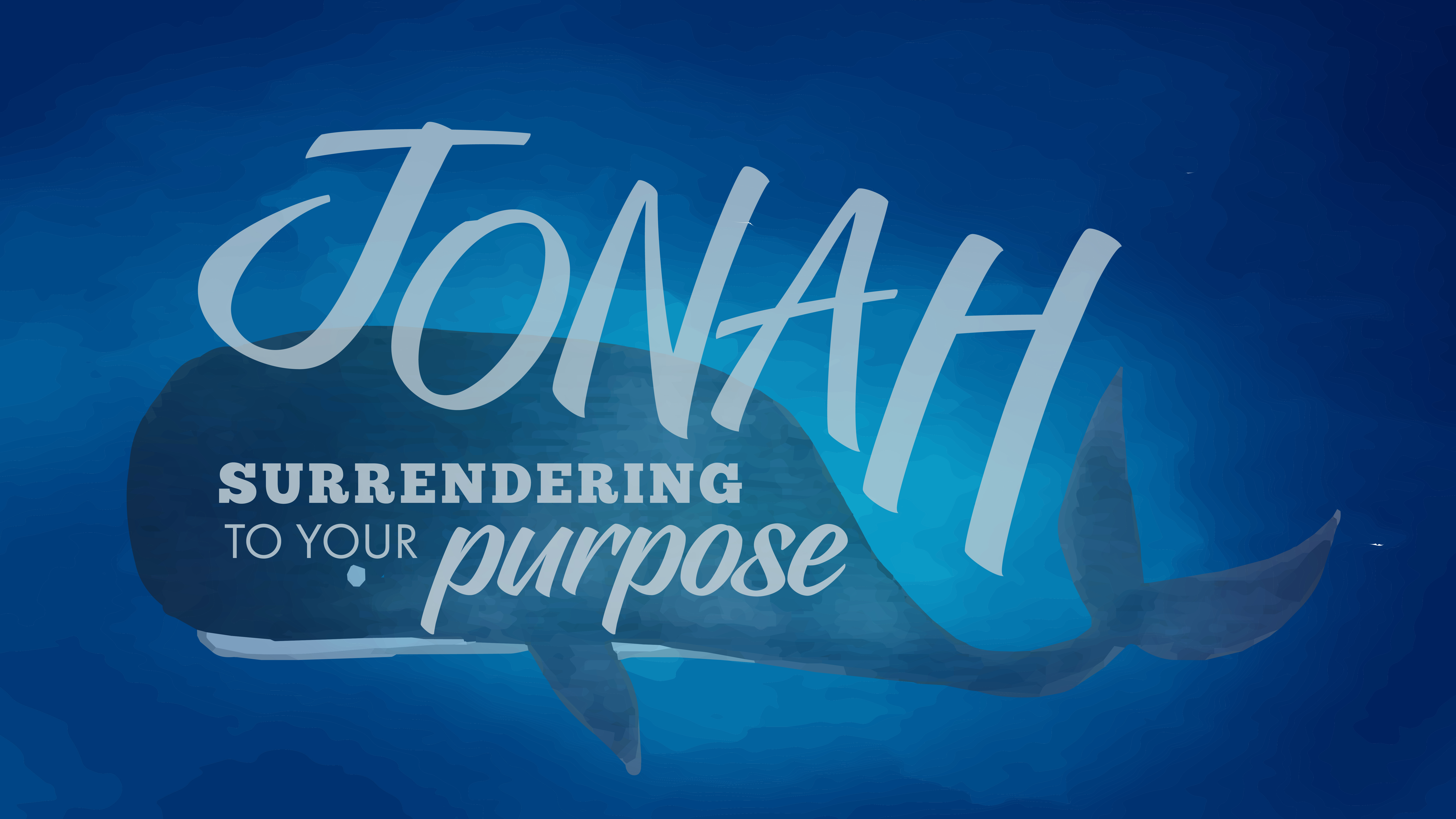 More in Surrendering to Your Purpose

Your Purpose is to Surrender

You Can Run But You Cannot Hide