Rather train yourself for godliness; 8 for while bodily training is of some value, godliness is of value in every way, as it holds promise for the present life and also for the life to come. 9 The saying is trustworthy and deserving of full acceptance.

In doing so we overlook the fact that bodily training is of some value. Surprisingly the bible has a lot to say about how we are to take care of our bodies.

In other scriptures Paul says

24 Do you not know that in a race all the runners run, but only one receives the prize? So run that you may obtain it. 25 Every athlete exercises self-control in all things. They do it to receive a perishable wreath, but we an imperishable. 26 So I do not run aimlessly; I do not box as one beating the air. 27 But I discipline my body and keep it under control, lest after preaching to others I myself should be disqualified.

In this verse Paul is comparing his walk of faith to that of an athletic competition.

Athlete- one who participates in strenuous competitive physical sport or games, requiring specialized training and involving a degree of formal organization in its performance.

He also says that he disciplines his body and keeps it under control.

Discipline- to beat black and blue, to smite so as to cause bruises and livid spots.  Like a boxer who buffets his body, handles it roughly, disciplines it by hardships.

It does not sound like Paul takes it easy on his physical body, but rather he disciplines it by hardship.  Why, so that he would not be disqualified from preaching to others.

I can attest to what he is saying.

When I first started going to the gym, I felt like I had to prove myself as a hard worker before anyone would hear what I had to say.  I had to gain the respect of guys who have been working out for years.  If I was to go there and do some halfhearted workout or just give up immediately when faced with difficulty, no one would take me seriously. I would lose all respect as well as my ability to speak anything into their lives.

That is what Paul meant by disciplining his body so that he did not disqualify himself.

He uses the same amount of self-control to control his body that an athlete would use in preparing for a competition.

Get Fit for God Size Missions

It was important for Paul to train his body as well as his spirit. During his three missionary journeys Paul would travel over 10,000 miles by foot plus his voyages by sea. His total traveling distance about 20,000 km or 12,427 miles.  That’s a lot of traveling.

It is estimated that when Paul walked, he walked anywhere between 20-30 kilometers a day which is about 12-19 miles a day.  Even twelve miles a day is a lot.

To do what God had called him to do, it was necessary for Paul to discipline his body accordingly. It was vital that he remained in shape.  Had he not been a good steward over his body, those missionary journeys would have been impossible.

If our bodies are out of shape and not able to function as they should, our minds will be affected, in the way which we perceive ourselves, and our soul will be affected which is the moral and emotional nature of human beings thereby affecting our witness to others. Our mind body and soul are intertwined.

If a person perceives themselves as overweight, unfit, not in shape or unable to do certain things, then that person will probably struggle with insecurity with his/her self not reaching their full potential.  If you’re not confident with your body, you won’t be confident with your witness.

Besides Paul there were other people in the bible who were also given a difficult task which required having a good physique.

Like Ahimaaz who had the responsibility of bringing a message of victory to king David. He outran the other messenger, a Cushite who had left before him to bring David news that his oppressor had been defeated.

Or like Both Mary Magdeline and Mary the mother of Jesus who went to the tomb of Jesus.  They were met there by an angel who had told them that Jesus had risen and instructed them.

Running requires discipline.  You don’t just get up and run a great distance without first disciplining yourself.  Trust me I know that from experience.

Then there were Jesus’s disciples.  Jesus had told them to cross the sea of galilee even though he knew they would be going against the wind. The distance was approx. 10 ½ miles to the other side of the sea from where they were.  That was a long way to work against the wind. Jesus came to them walking on the water intending to pass them by.

48 And he saw that they were making headway painfully, for the wind was against them.

The disciples were making headway painfully.  Meaning they were exerting themselves and they were making progress.  Their physical strength had been proven against the strong winds.  They had prepared themselves beforehand for this moment.

So that when Jesus had told them to go across, they would be ready to do so. In this same story we find Jesus going up a mountain to pray. If anyone has ever walked up a mountain you know how difficult of a task that its.  (Prayer tower in El Salvador) Jesus was in great shape as well.

It is important that you Get fit so that when called upon to do something great for God, then you will be found ready. (like going to El Salvador)

Besides being fit for God size missions,

Get Fit to Prolong Your Life

Keep all His statutes and His commandments which I command you, all the days of your life, and that your days may be prolonged.

This scripture and many more like it point to the idea that God blesses us with a longer life if we follow His commandments.

It is considered to be a blessing not a curse to have a prolonged life.

Today, with the knowledge that we have from researchers we know that in order to have a longer life we must not only have a lifestyle of exercise, but we must also eat the right things.

Eating a healthy, balanced diet plays an essential role in maintaining a healthy weight, which is an important part of overall good health.

Being overweight or obese can lead to health conditions such as type 2 diabetes, certain cancers, heart disease and even strokes. Being underweight could also affect your health.

The secret is to

Every doctor will tell you that your health is dependent upon your physical activity and what you are putting into your body. If you are sowing junk into your body, then you will reap junky results.

Did you know there is research that links pig meat to many diseases such as:

In America, about 1 out of every 10 store-bought pig livers tests positive for hepatitis E

There is a reason why Jesus cooked fish instead of bacon as a breakfast for his disciples.

16 Do you not know that you are God's temple and that God's Spirit dwells in you? 17 If anyone destroys God's temple, God will destroy him. For God's temple is holy, and you are that temple.

Find a healthy eating plan that works for you and make it a part of your lifestyle.

Get Fit for the Glorify of God

19 Or do you not know that your body is a temple of the Holy Spirit within you, whom you have from God? You are not your own, 20 for you were bought with a price. So, glorify God in your body.

When Christ died, he not only died for your spirit but for your entire being.  By dying on the cross, He payed the price for your body therefore we no longer belong to ourselves but to Him.

Your body is a temple of the Holy Spirit, meaning your body is a carrier of the presence of God. Paul says to Glorify God in your body.

Glorify- to hold in honor. We do this by keeping the body holy and complete.

The truth is we were made in the image and likeness of God and we are to reflect His goodness in the earth through our physical bodies.

1I appeal to you therefore, brothers, by the mercies of God, to present your bodies as a living sacrifice, holy and acceptable to God, which is your spiritual worship.

Paul would even say it is spiritual worship to God when we present our bodies as Holy and acceptable.  So, while you’re walking around the block, you’re worshipping God.  Or while you are making healthy eating choices you are honoring God through your body which you have been called to be a steward over.

I want to end out with one final verse:

7 I have fought the good fight, I have finished the race, I have kept the faith. 8 Henceforth there is laid up for me the crown of righteousness, which the Lord, the righteous judge, will award to me on that day, and not only to me but also to all who have loved his appearing.

At the end of my life I would like to be able to say the same thing that Paul says.  I have fought the good fight, not just spiritually but also in my body against the lust of my flesh.  I have finished the race, I did everything that I was supposed to do.  I was not hindered because of my inability or poor physique.

I do it all for the glory of God, so that He would be glorified through my life. 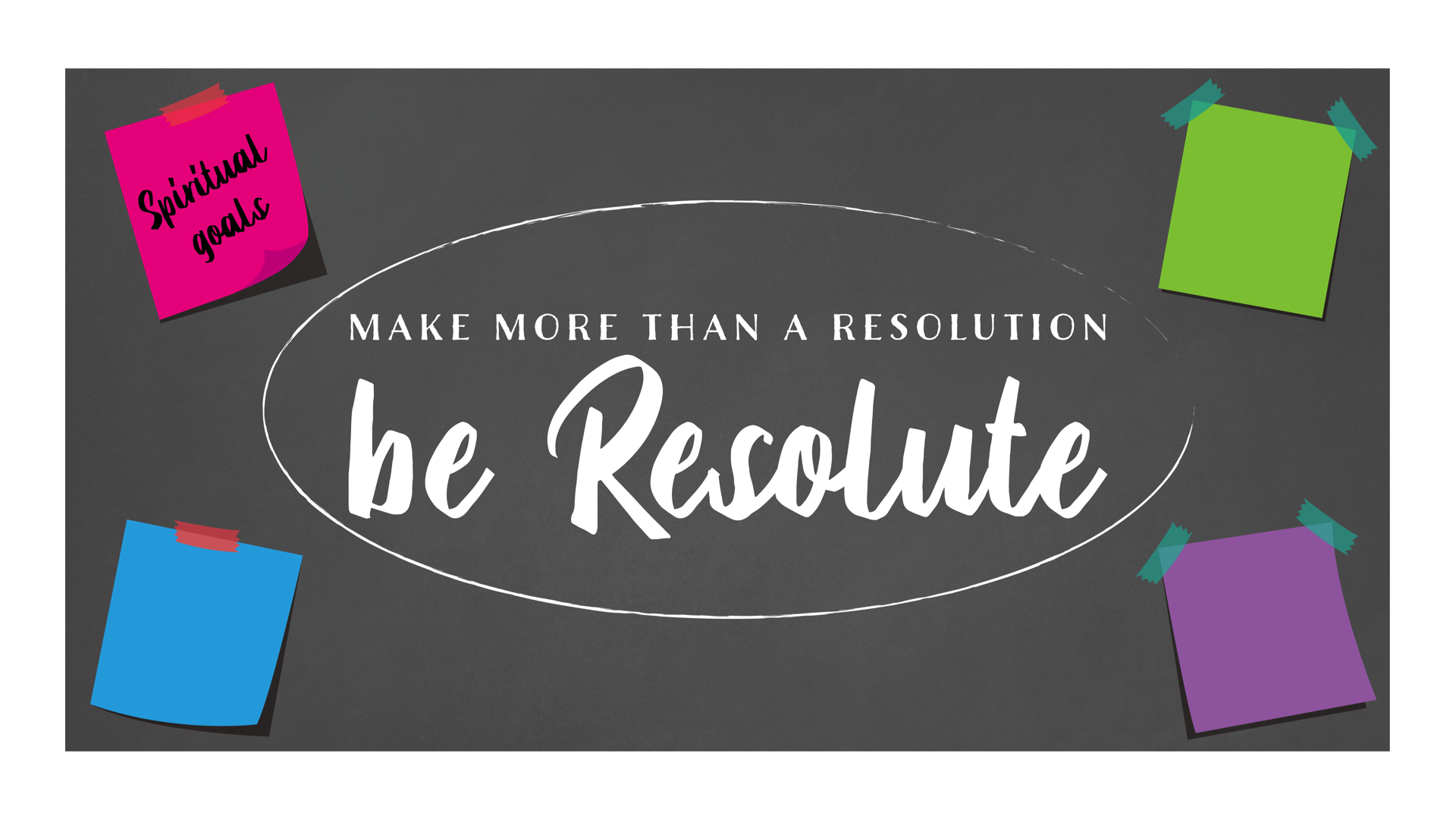 More in Be Resolute

Who Are You Yoked to?