It is a Psalm of David, which is believed to be written when the ark of the covenantwas being brought to the place prepared for it in the city of David better known as Jerusalem.

(Video of zooming out from space to be played while reading)

1The earth is the Lord's and the fullness thereof,
the world and those who dwell therein,

Everythingthat has been and that is or that will be, belongs to the Lord. The universe is His, this planet called earthis His.

So, it is complete foolishnessfor the created being to say to its creator“I don’t belong to you, I make my owndecisions and do whatever I want to do.”

No, He is creator God.  He is the one who put in place the planetsand even exoplanetswhich are planets that are not part of our solar system.

Did you know that as of March of last year there have been 2,343 exoplanets found using the Kepler Space Telescope?

It seems like the more discovery’sastronomers make regarding the size of this universe, the smallerwe become in the grand scheme of things.

We had the privilege to listen to a real astronaut who worked on the space station for 6 months. He was at the men’s conference and one thing that he was awestruckby was the fact of how big this universe is and how small earthwas in comparison but ultimately how small humanityis in comparison to it all.

Let Him in By Accepting Your Portion in This Life

(We give our kids allowance money and teach them how to give, save, and spend)

Your house, your money, your family, your childrenall belong to the Lord.

Therefore, we ought to be content with the portionthat He has entrusted to us and not be jealous of others.  Because ultimately everything belongsto Him anyway. We are only stewardsover that which has been entrusted to us.

So, this should bring about a holy fear, in the way that we steer our kids, the way we manage our money, the way we deal with others.

Let Him in to Inspire Awe and Wonder

He made it, formedit and made it suitablefor the needs of man. He made everything by himselfand for himself.

When God first formed the earth, He did so by speaking it into existence.  God had spoke that the “waters under the heaven be gathered together into one place and let the dry land appear.”  And it was so. The dry landbecame known as earth and the waters were called seas.

This earth has become what it isby the fact that God has founded it; and, therefore, what it produces belongsof right to Him.

David uses the first two versesto reflect on the awesomenessof Creator God. These two verses should cause the reader to be in awe and wonderof who God is.

Let Him in to Ignite a Longing for More of Him.

3 Who shall ascend the hill of the Lord?
And who shall stand in his holy place?

After painting a picture of the grandeur of GodDavid turns his attention to the frailtyof mankind.He asked the question who can ascend to the hillof the Lord?

What David suggests is that even with the earth and all the majestythat entails it, it still leaves us with a voidthat can be only filled withGod Himself.

That desire is to ascendto the hill of the Lord.  As great as this earth is, it does notcompletely satisfy.  Complete satisfaction can be found in God alone.  David’s desire is to be standing in His holy presence.

David knew that only the presence of Godcould truly satisfya person. Yet so many people spend their whole lifetrying to satisfy a desire that was only meant to be filled by God Himself.Until we learn this we will continue to chase after wild fantasiesand will never be satisfied.

Let Him in To Change the Inside of Who You Are

David also realizes the Holiness of Godand that not everyonecould ascend to the hill of the Lord.  He gives some stipulationson how to attain this divine satisfaction.

4 He who has clean hands and a pure heart,
who does not lift up his soul to what is false
and does not swear deceitfully.

He says those who have kept themselves from sinor from the pollutionsof the world and of the flesh have access to this life sustaining God.  However, no one who was uncleancould ascend to where God was.

He says both clean handsand a pure heart.  It is one thing to do good actsof service with your hands, but true godliness consist of having a pure heart. God looks at the motives of the heart.

A person who can ascend to the hill of the Lordhas both clean handsand a pure heart.  You do what is right before man, and your heart is right before God. Such a person does not swear deceitfullymeaning they do not break their promises.

How important for us as believers to be men and women of our word.  That what we say, lines up with what we do.  That our yeses are yeses and our no’s are no’s.

Let Him in So That You Will Be Truly Blessed

5 He will receive blessing from the Lord
and righteousness from the God of his salvation.

There is a rewardfor those who haveclean handsand a pure heart.  The reward is blessingsand righteousness. Our reward for the end of it all is to be clothed in a robeof righteousness.  Oh, That God would look at our lives and declare us righteousor to be in right standing with God.

6 Such is the generation of those who seek him,
who seek the face of the God of Jacob. Selah

In every generation that has been a remnant of peoplewho sought the face of God.  They were those who were not satisfiedwith the things of this earth, but rather they put their sights on heavenly things.

Jacobis mentioned by name, as he sought the Lordand foundHim.  As believers in Christ we are heirs to the promisejust as Jacob was a direct heir of Abraham. So this means If you seek Him like Jacobsought him then you will find Him.

Let Him in Because He Is Knocking on The Door

7 Lift up your heads, O gates!
And be lifted up, O ancient doors,
that the King of glory may come in.

Gates and doorsare mentioned more than oncein this verse.  Both gates and doors give accessinto a place.  Normally if you would hear a knockon the door, you would automatically ask “who is it.”

Revelation 3:20“Behold I stand at the door and knock.  If anyone hears my voice and opens the door, I will come into him and eat with him, and he with me.

It is interesting that David had this revelation about Christeven though He had not come to this earth just yet. He understood that Christ was on the other side of gatesand doors and that it was necessary for Him to enterthrough those doors.

We know that he is talking about Christbecause of the next line.

8 Who is this King of glory?
The Lord, strong and mighty,
the Lord, mighty in battle!

The only personwho fulfills this description is Jesus himself. He is king, He is Lord, He is strong and mighty, and He is Mighty in battle.  Jesuseven made reference about himself when he was talking about shepherd and how true shepherds enterthrough the gate.  They do not come jump the fence or come some other way.

Truly, truly I say to you, he who does not enter the sheepfold by the door but climbs in by another way, that man is a thief and a robber.  But he who enters by the door is the shepherd of the sheep.  To him the gatekeeper opens.

Jesus is knockingon the doors of our hearts wanting us to let Him in.  He is waiting for you to give access to your heart. The psalmist David is encouraging us to lift up thosegates and doorsso that the king of Glory can come in.

Notice the progressionof this psalm

First David is in awe of God’s greatnessand of His creation He gives adoration.

Then He desires to ascend to God’s holy hillto be in His presence and to do so we need to have clean handsand a pure heart.

Then the gate or doorsthat we have set up that have keep Christ outof our lives, need to be lifted so that He could come in.

Is it fear, worry, doubt, generational curses, insecurity… what needs to be lifted in your life so that the king of glory may come in?

Because He is mightyin battle.  You need to let Him inbecause it is He who can fightyour battle for you. It is He who has already won.  So, lift up those gates, and be lifted up you everlasting doors.

Sometimes the phrases of Psalms are repeated for emphasis.  David repeats his plea again.

9 Lift up your heads, O gates!
And lift them up, O ancient doors,
that the King of glory may come in.

The call is to open up the gates. The gates to the city of Jerusalem were so heavy that it would take approximately 20 mento open up the gates.  Perhaps for some of you the door that separates you from Christhas been there for so long and it weighs a ton.  Having another brother or sister in Christto help you open the door and gates would be very beneficial.

Let Him in not only for habitation’s sakebut ultimately for possession.  Because everything and every person belongs to the Lord.

Who is He, He is an all sufficient Saviorif we give Him access to our hearts? 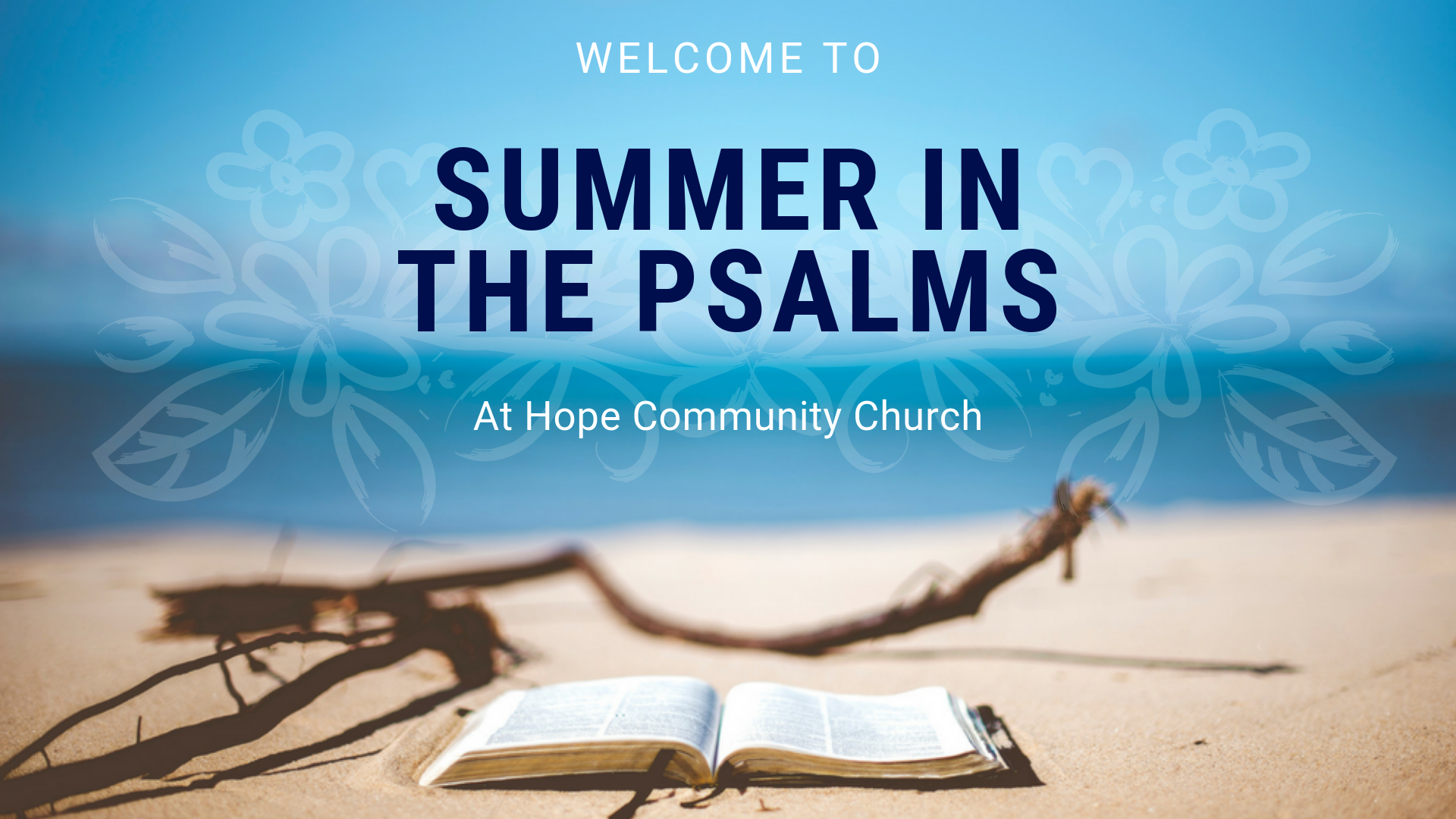