7 “Blessed are the merciful, for they shall receive mercy.

Mercy- compassion for the miserable

The Lordwould say this about Himself:

6  “The Lord, the Lord, a God merciful and gracious, slow to anger, and abounding in steadfast love and faithfulness,

The Prophet Micahwould say this about the mercy of God:

Who is a God like you, pardoning iniquity and passing over transgression for the remnant of his inheritance?  He does not retain his anger forever, because he delights in steadfast love.

The Apostle Paulknown Him to be the father of Mercies

3 Blessed be the God and Father of our Lord Jesus Christ, the Father of mercies and God of all comfort,

Also, Paulknown Him to be richin Mercy

4 But God, being rich in mercy, because of the great love with which he loved us,

It is the very nature of who Godis, to demonstrate the richness of His mercy.

27 And Jesus said to them, “You will all fall away, for it is written, ‘I will strike the shepherd, and the sheep will be scattered.’ 28 But after I am raised up, I will go before you to Galilee.”

After eating the Passovermeal with His disciples, Jesus foretellsof the mercyHe intends to show to his disciples, even while knowing that they would all scatter and abandonhim.  He tells them that He would go before them to Galilee.  This was a great mercyshown to them.  Because Galilee was the place in which they were to meet up againafter He had resurrected.  But beforethey would get to Galilee, they would experience shame and guiltfor abandoning Jesus alone.  They would feel like complete failuresfor forsaking Jesuswhen He would need them the most.

But Jesus looks into the futureright past their denial, their desertion, right past all of their failuresand sees them meeting again in Galilee.  Jesus was giving mercyto them before they even realizedtheir needfor it.

Jesus speaks of Galileea place in a time after their epic failure, a place of putting behind their failures, a place of renewed vision, a place of launchingout into the purposes of God, a place of Mercy.

29 Peter said to him, “Even though they all fall away, I will not.” 30 And Jesus said to him, “Truly, I tell you, this very night, before the rooster crows twice, you will deny me three times.” 31 But he said emphatically, “If I must die with you, I will not deny you.” And they all said the same.

So, Peter insistthat he will not need the mercythat Jesus provides because he would not abandon Jesus even if the rest of the disciples did.  He must have thought, I don’t have to wait to Galileeto meet up with you, I will just follow you wherever you go.

If we are not careful, we can have this mentalitywhich thinks that we will never sin or fall shortof the glory of God and that we have arrivedat some superior spiritual level above everyone else.

Jesus puts him in his place and says Peter you won’t only abandonme like the others, but you will denyme three times.  I know what you will do, but I will meet you in Galilee.

66 And as Peter was below in the courtyard, one of the servant girls of the high priest came, 67 and seeing Peter warming himself, she looked at him and said, “You also were with the Nazarene, Jesus.” 68 But he denied it, saying, “I neither know nor understand what you mean.” And he went out into the gateway and the rooster crowed. 69 And the servant girl saw him and began again to say to the bystanders, “This man is one of them.” 70 But again he denied it. And after a little while the bystanders again said to Peter, “Certainly you are one of them, for you are a Galilean.” 71 But he began to invoke a curse on himself and to swear, “I do not know this man of whom you speak.” 72 And immediately the rooster crowed a second time. And Peter remembered how Jesus had said to him, “Before the rooster crows twice, you will deny me three times.” And he broke down and wept.

It happened, the very thing that Peter said he would never do, he did it.  He deniedChrist before men at a timewhen he should have confessed himand owned him as his Lord.

He immediately feels the weightof his sin and is very sorrowful. He broke down and wept.

Perhaps he asked himself:

When Jesus asked Peter, Who do you say that I am and Peter responds “You are the Christ, the Son of the living God.” He was so certain then, yet so uncertain at this critical time in Jesus’ life.  But even in that moment Jesushad told Peter that upon that revelation He was going to buildhis church.

He looked into the future of Peter’s lifeand yes He had seen the denialbut he also seen the man of God that Peter would become.  It was His Mercy to bestowupon Peter the honor of buildingHis church.

Perhaps you too have experienced great failures in your life.  I know that I have.  Perhaps you have asked those same questions

If the Peter’s story ended here, it would be a very tragicstory. But his story does not end in denial, shameor defeat, or weepingbecause Jesus by an extension of His mercyhad made Peter a couple of promises.

That He was going to build His churchupon Peter’s acknowledgement that Jesus was the Son of God, and that He would meet him again in Galilee.  For these promises to come in effect, it would only be brought about by the mercy of God.

Mercy keeps us from getting what we deserve. In other words, for Peter’s sins he deserved the wrathof God, and for our sins, we deserve the wrath of God.

But Mercy, (compassionfor the miserable)

I am thankfulthat we serve a merciful God, who is compassionatetoward our miserablestate, He is abounding and rich in mercyand that Mercy is the essenceof who God is.  He is slow to anger, pardons our iniquity, and He is the Father of mercy.

Despite being denied by Peter, Jesuswould further extend His mercytoward him in a greater way. This comes about after Jesus had resurrectedand had shown himself to His disciples in Galilee.   Peter and six other disciples decide to go back to their daily jobsas fishermen, after having seen Jesus in Galilee.

Jesushad illustrated one the greatest acts of Mercyto Peter, He entrusted him with the care of His flock.  The people who He had poured His lifeinto, and to those He had given his life forwas to be placed in Peter’s care. In other words, Jesus was saying “I trust you Peter.”  He does not only say it oncebut He says it threetimes; for every time Peter had deniedJesus, Jesus reaffirms himwith an extensionof His mercy.  For every time that you have failed, there is an extension of His mercywaiting to meet you.

Jesus shows mercy to Peter, he then reinstates himand entrusthim as one of the shepherdsof his flock.

The beautiful thing about Mercy, once we have tasted of it, it is to be shared with others.

Be merciful, even as your Father is merciful.

To be as merciful as our heavenly Father is quite a challenging task.

But to have an attitude of mercyis to rememberthat we need mercy.  When we keep our short comingsin view, we will then have proper perspectivewhen dealing with other people’s short comings. So that we could reciprocate the same mercythat we have received to those who have wrongedus.

You will be able to show mercyto your abusive relativeas you keep in mind the times that you were harshto other people and how Christ forgaveyou for your harshness.

You will be able to show mercy to those who were not there for yougrowing up, as you remember the times that you were not therefor others.

You will be able to properly balance discipline and mercyto your kidsas you remember that you were a kid onceand probably did the same things that they did, if not worse.

You will be able to show mercy to a spousewhen they have wrongedyou, when you reflect on the times that you have wronged themand how they forgave you.

We are able to show mercy to others, because we ourselves have been recipientsof His Mercy.

Because Christ showed us mercyand forgave us of our sinsand made us white assnow,we should then likewise reciprocatethat same mercy to others.

The key to becoming a merciful person is to become a broken person. You get the power to show mercy from the real feeling in your heart that you owe everything you are and have to sheer divine mercy.

15 but in your hearts honor Christ the Lord as holy, always being prepared to make a defense to anyone who asks you for a reason for the hope that is in you; yet do it with gentleness and respect,

Peter has learned from his mistake; He coweredwhen he was asked about his relationship with Jesus, now he is encouraginghis audience to always be prepared to make a defense for Christ, to own Himas Lord, and not be ashamedof the one who is our eternal hope.  He encourages his audience to be merciful.

He could say thiswith a great amount of persuasionas he knew what is was like to deny Jesus, and to receive His Mercy.  This came from his personal experience.

So, what does that mean for our lives today? Those who are mercifulin this life will experience mercy in the next.

Mercy- compassion for the miserable 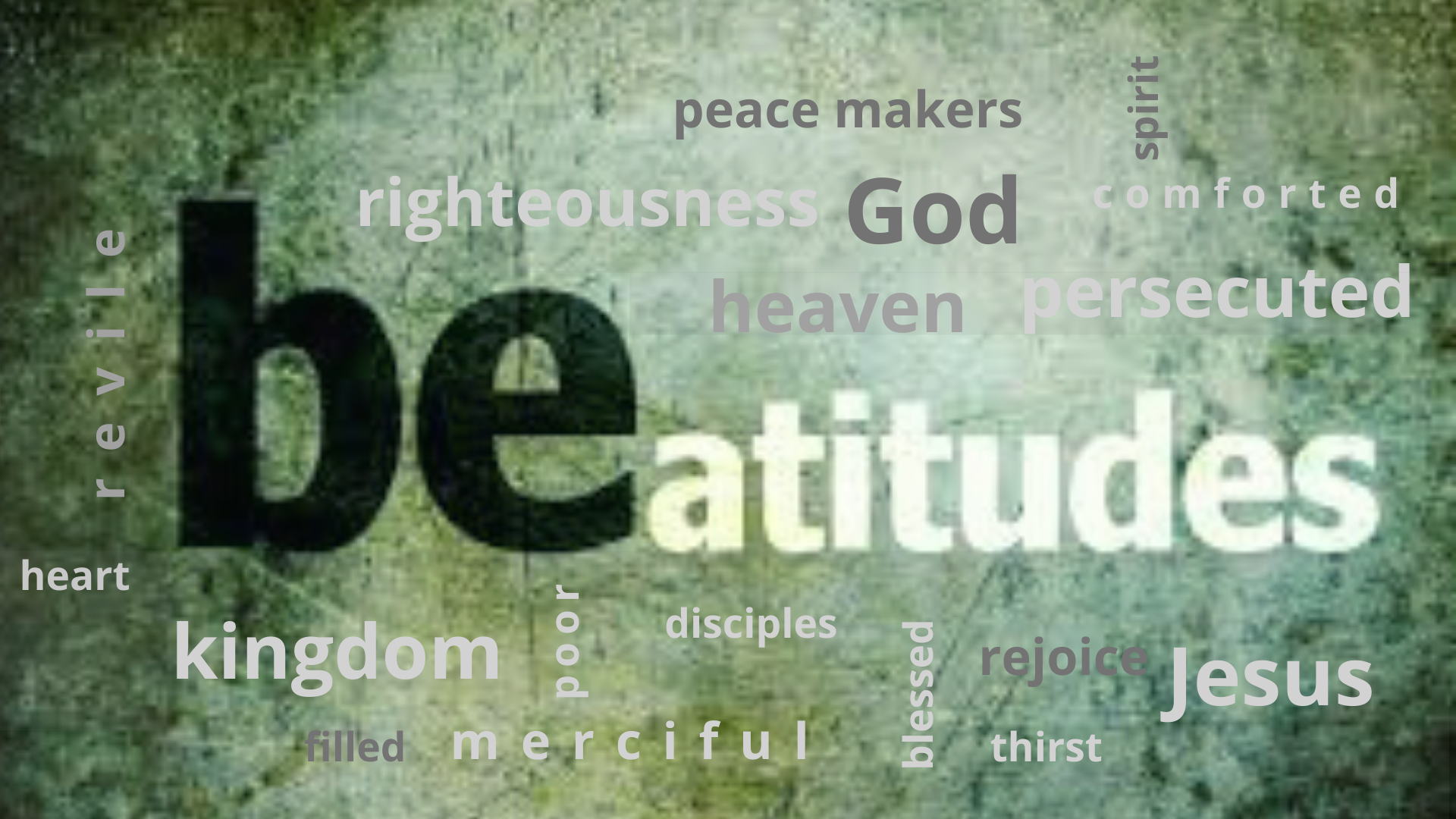 More in Be Attitudes

The Orphan, The Widow, The Poor, and Me

Cultivating an Attitude of Humility