Gifts (The Greatest Gift Exchange Ever)

The Greatest Gift Exchange Ever

1 Now after Jesus was born in Bethlehem of Judea in the days of Herod the king, behold, wise men from the east came to Jerusalem,

Magos- which is the Babylonian term which often referred to wise men, physicians, astrologers, seers, interpreters of dreams, soothsayers, sorcerers.

In our case it is talking about the pagan astrologerswho came looking for Jesus.  They were also known as Magiwho dabbled with dark artshence we got our English word magicand magician.

We see examples of such people in the book of Daniel.  When King Nebuchadnezzarhas a dreamand none of those who dabbled in the black arts were able to interpret the King’s dream. The King then gives the order to kill them all, that’s when Daniel steps in and praysto His God.  God revealsthe dream to Daniel and its interpretation.  According to Deuteronomy, these people who practiced such things were an abomination to God. Such practices were prohibitedamong God’s people and even punishable by death.

Matthewmight as well said, “the worst of sinnersare coming from the east.”

The Wise men were astrologerswho studied the stars, and one day they spotted a star that was unlikeanything they have seen before.  It was so bizarreand extraordinary, that they took this to mean an extraordinary personwas born in the land of Judea. Little did they know how extraordinary this sought out person really was.  Nor did they realize how their lives would be forever impactedby this one visit.

Another interesting thing about this, is that when God notified the Jewish shepherdsof the Messiah, He uses an angelto deliver His message.  However, when He notified the gentiles “wise men” He used the stars.  In both cases God had used what each group were most familiarwith to bring both Jew and Gentile together to witness the birthof the Messiah.

By bringing both groupstogether to witness the birth of Christ, Godwas making a statement, Salvationis for all, both Jew and Gentile.  Which is important for us today who are not Jews.

By the way this was not the first timesomeone of prominence came from a distant landto pay a visit to Jerusalembecause something spectacularwas happening there.  In the days of Solomon, the queen of Sheba came to visit Jerusalem to hear of his wisdomwhich he had received from the Lord.  She was amazed and gave him giftsof spicesgoldand precious stones. This was a foreshadowing of the event we are reading about today.

Just as the Queen of Shebacame seeking to hear of the wisdom that God gaveSolomon, the wisemenare coming to seeGod’s wisdomfor man’s reconciliation.  They have come to discoverfor themselves God’s planfor man to be saved.

2 saying, “Where is he who has been born king of the Jews?

It was believed by most at that time that an eastern powerwould prevail and that a person coming from Judeawould obtain dominion. So, when the wise men see the star, they automatically concludeit was the kingthey had anticipated.  They were certain of it as they asked, where is He?

For we saw his star when it rose and have come to worship him.”

Pagans, sinners, have traveled a long distance to worshipthe King of the Jews.   Their whole reason for coming was to worship.

Worship- to show homage by kneeling or prostrating oneself to another of superior ranking. It’s a gift anyone can give.

It is a way of humbling and submittingoneself to another. The first giftthese wise men brought was the gift of worship.  There was no alternative motive, they did not come seeking what they could gain.

Gifts Are Given with A Certain Motive

It is rather spectacular that these pagan astrologershad more insight about worshipthan the Jewshad regarding their own king.

3 When Herod the king heard this, he was troubled, and all Jerusalem with him; 4 and assembling all the chief priests and scribes of the people, he inquired of them where the Christ was to be born. 5 They told him, “In Bethlehem of Judea, for so it is written by the prophet:

6 “‘And you, O Bethlehem, in the land of Judah,
are by no means least among the rulers of Judah;
for from you shall come a ruler
who will shepherd my people Israel.’”

Way before the wisemenmade their journey to Jerusalem to worship, God had made a promiseto His people.  He promised a rulerwho will shepherdHis people.  This ruler, Jesus, would be God’s gift to allof mankind.  Though God intended Himto be a gift, Herodreceives this message regarding the king of the Jews as a threat.

Suddenly, Herod is alarmedand feels threatenedby the idea that there is another kingbesides him.   Perhaps he thought this new king would clash against or interferewith his secular power.

However, Christhas come to set up a heavenly kingdom.  Herod must have knownof the prophecies of the old testament which foretoldthis event.  Perhaps, after many years of successas king, he began to think as the Jewsthat it was never goingto happen and that his kingdom would continue uninterrupted.

Anyonewho has been promised a giftof some sort by a loved one only for it to never happen, knows what a disappointmentthat is.  That is the peril of trusting man’s words.

But with God His promisesare yes and amen.  When He promised to give a gift, mainly the Messiah, then it was sure to Happenat the timeHe said it would.

The wise men knew the timeaccording to when the star arrived, the chief priestand the scribes knew the placeaccording to the old testament prophecies.  Togetherthey were able to narrow downexactly when and where the Messiah was to be born.

Gifts Are Given at A Certain Place and Time

7 Then Herod summoned the wise men secretly and ascertained from them what time the star had appeared. 8 And he sent them to Bethlehem, saying, “Go and search diligently for the child, and when you have found him, bring me word, that I too may come and worship him.”

As we find out later, Herod had no intentionof worshiping this newly discovered king.  He was only wanting to know the location of where he was to be born so that he could have him killed.  He was set on killing God’s giftto mankind.

9 After listening to the king, they went on their way.

What is interesting is that the wisemen leave the king’s court alonewithout any of the king’s men to accompany them to ensurethey do what they were commanded to do.  The king fully expectsthese wisemen to carry out his orders.  What isheartbreakingabout this, neither the chief priestnor the scribesaccompanythe wisemen to Bethlehem to see for themselvestheir long awaited new born king.

Imagine if you are the wisemen, having traveled a long distance to Jerusalemto worshipthe king of the Jews, and upon arriving, the chief leaders of the Jews have nothing to do with himand show no interestin seeing him themselves.  Nonetheless, the wisemen continued their pursuit.

And behold, the star that they had seen when it rose went before them until it came to rest over the place where the child was.

The same star that intriguedthem at the beginning, had disappeared for a seasonduring their meeting with Herod, then returned to themafter they had left Herod.  Though this starcould be considered a gift, would lead them to the greatest gift ever.  It would lead them to the one who is called “the brightmorning star”in Revelations.

10 When they saw the star, they rejoiced exceedingly with great joy.

Gifts are to be received with Joy

They rejoiced as their journey was not in vain.  God was faithful to guidethem to the place in which they would meet His Son. Though they were pagans, I believe they started to have great faith in Godat this point.  Perhaps the joythey experienced came from the spirit Godas they rejoiced exceedinglywith great joy.  Though they were foreignersto the commonwealth of Israel,God had shown them favoralong their journey.

So, it is when we come to faith in God through Christ.  We too will experience unparalleled joyand a measure of His unmerited favorpoured out on our lives.  A joy which cannot be described, a joy which overrulesall other negativeemotions.  Joy is an indicatorof a person receiving a good gift.

They had a reason to have joy as they were about to receive the greatest gifta person could receive.

11 And going into the house, they saw the child with Mary his mother, and they fell down and worshiped him.

In this verse we see the greatest gift exchangethat ever took place on theface of the earth.  Upon seeing Jesus, these pagan astrologers, realized how insignificantand sinfulthey were in comparison to our magnificent, Holyand righteousLord, they fell and worshippedHim.

They gave to Jesus the gift of worship and adoration, and God had given them something that had cost Him everything, His son Jesus, the gift of salvation to all who believe.

Though their gift of worship could not add anything to who Jesuswas, the gift of seeing Jesus, the Son of God, would forever have an impacton their lives in this lifeand in the life to come. Though they entered as unworthy sinners, they left as justified believersaccording to their faith in Christ.

Then, opening their treasures, they offered him gifts, gold and frankincense and myrrh. 12 And being warned in a dream not to return to Herod, they departed to their own country by another way.

Because they ascribed worth and valueto the giftthey had received, they then lookedinto their treasuresto see what else they could further giveas a gift to their newly found king.

The gifts they had brought along with them:

By bringing the gift of gold the wisemen showed that they considered Jesus a King.

It was used in ceremonial worship to a deity.  In the old testament, only the purest frankincensewas to be offered to God by the priestfor a pleasing aroma.  By the wisemen givingthe gift of frankincense they considered him not only king but also priest. Meaning He alone was pure and holyand the only one qualifiedto be the mediatorbetween God and man.

Myrrh- was a key ingredient in the mixture of spicesthat were used to prepare bodies for burial.

Myrrh was a main ingredient in the anointing oilused to ceremonially prepare the priests, the instruments, the altar, and the Templeitself before sacrificescould be made.

Whether or not they realized it, with the gifts they had brought, the wise men declared him to be their King, their Priest, and that He would die as a sacrificefor the sins of man.

It really was the greatest gift exchangein all of history.

The beauty about this story is that it the gift of Jesus is not only for the wisemen, but for all those who seek to know Him. Just as it was by divine providencethat these men from the eastcame to experience the Christ, so it is with you and me.

John 6:44 44 No one can come to me unless the Father who sent me draws him. And I will raise him up on the last day.

It is the spirit of God who leads mento repentance. It does not matter if you are the worst of sinners, He will pass up the religious people, who pretendto have it all together, to bring you to an encounterwith His Sonin which you will be forever changed.  He is willing to take your wickednessin exchange for His righteousness.  It is the greatest gift exchange ever.

Have you received this gift of salvation for yourself? It is a gift and cannot be earned.

What gift could you bring, that is worthy enough to give King Jesus?

What will your motive be in giving the gift?

When and where will you give the gift?

What do you expect in exchange for your gift? 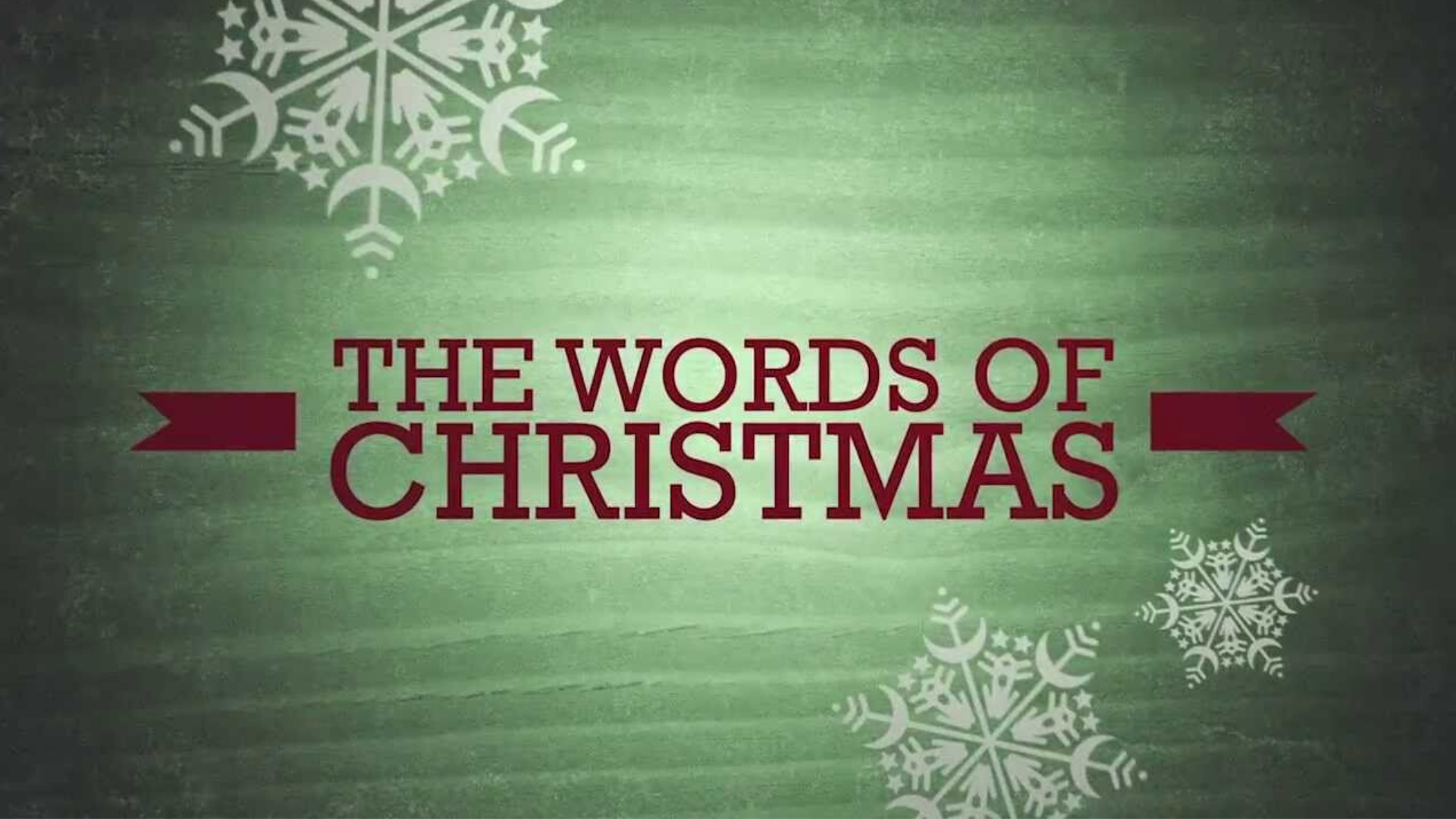 More in The Words of Christmas