When This is Over...What Will Last?

When This is Over… What Will Last?

Recap:  Last week we talked about how Elijah went through a time of depressionand was even pleading with the Lord to take his life.  This came about after a great victorywhen the Lord had used Elijah to turnthe heartsof the people of Israel back to the one true God. Which should be a reminder to us to never let our guarddown even amid a great victory.

The Lord was mercifultoward Elijah.  He had sent His angel to nourishand encourage Elijah during this time.  Elijah was then commissionedby the angel to go to Damascus.  God was not yet donewith him.

As we finish out this series on Elijah today keep this question in mind.

Before Elijahwas to be taken up in a whirlwind of fire, He still had three missions.

He was to anoint

The first two missions were relatively easy taskfor the man of God.

When we look back at the time when Samuel anointed Saul to be king of Israel, he simply

The instructiongiven to Elijah was to anoint Elisha as a prophet. Though He was not just any prophet but one that would take Elijah’s place. This would require more than just pouring oilon Elisha’s head. Rather Elijah was going to have invest in Elisha’s lifebefore he could take his place.

Would you be obedientif God had asked you to raise up your replacement?

Elijah was far from being jealous,as he had basically said to the Lord that he was done.  I think He was relievedto hear that someone else was going to continuehis work, especially after thinking that he was in this thing all alone. We know this because Elijah went to Elisha firsteven though he was the lastperson listed in God’s instructions.

Leave a Godly Legacy by Setting the Example

19 So he departed from there and found Elisha the son of Shaphat,

For Elijah to leave behind a Godly legacyhe must first set a godly examplewith his actions.

Elijah certainly achievedthis.  He did not stay in his depressedstate, but he obeyedthe word of the Lord and went to Elisha. His life was marked by obedienceto God’s voice.

Because of Elijah’s excellent example, Elisha refused to leavehis mentor’s side, even whenElijah insistedthat he should.  Elisha had seen something extraordinaryin the man Elijah. Before Elijah was taken up Elisha asked for a double portionof the Spirit of God that was upon Elijah.

That type of request only comes from seeing someone who has lived authentically for God. Before Elijah is taken up, lets go backto where he finds Elisha

19So he departed from there and found Elisha the son of Shaphat, who was plowing with twelve yoke of oxen in front of him, and he was with the twelfth.

Elisha was with the twelfth yokeof oxen.  Meaning there were 12 teams ploughingthe field, which also meant that Elisha’s family was well off.  Each team consist of two oxen yoked together with one person directing the oxen. Elisha was among the twelfth team working diligentlywith the resourcesat hand.

Many people want the callingbut are not willingto put in the work, while others are workingwhile ignoringthe calling.  Elishawas both willingto do the workand be obedientto the calling.  He was diligentin his day to day; therefore, he was the perfect candidatefor Elijah to disciple.

There are people in your life whom you should investinto and there are others who are just there to waste your time. They don’t listento Godly advice, they do not apply the scripturesto their lives they are stubbornin their ways and cold heartedto the things of God, and eventuallyyou should probably move on.For Elijah, it was time to move on from Ahaband invest in a diligent workerlike Elisha.

Because the one who is diligentin using the resourcesand or spiritual advicethat has been given to them then they are the ones worth takingthe time to disciple.  Which brings us to the word disciple.

To disciple someone may sound threatening, but it is basically teachingthem what God has taught youin your life thus far.  It is also encouragingthem in theirspiritual walkand giving of your timeand making yourself availableto them.  It is reaffirmingthem of their salvation through Christ though they mess up.  It is doing lifetogether.

The way that we will leave a Godly legacythat will carry on when we are gone, is to make disciples.

Elijah passed by him and cast his cloak upon him. 20 And he left the oxen and ran after Elijah and said, “Let me kiss my father and my mother, and then I will follow you.” And he said to him, “Go back again, for what have I done to you?” 21 And he returned from following him and took the yoke of oxen and sacrificed them and boiled their flesh with the yokes of the oxen and gave it to the people, and they ate. Then he arose and went after Elijah and assisted him.

Elijah was filledwith the Spirit of God. Elisha bore witnessto the Spirit of God that was upon Elijah, for when he but threw his cloakonto Elisha, he was willing to abandon allto follow the man of God.  He told Elijah that he would follow him.  Meaning he was submitting himselfas a studentwould submit to a teacher.

Much like when Jesus called the twelvedisciples and simply said to each of them “Come and follow me.” One by one they droppedwhat they were doing, and left behind occupations, familyetc… to followChrist.

Elisha’scalling was to be a prophet, and to take the place of Elijah.  He had humbled himselfas a plowmanof the field for the benefit of his family. Now he would humble himselfbefore God for his service as he was being called awayfrom his natural callinginto his spiritual calling.

Elisha was diligent workerwho was entrusted with a great callingof a great man of God.  It was throughElishathat Elijah’s legacywould continue.

One more thing that I would like to point out

Leave a Godly Legacy by Empowering Others

9 When they had crossed, Elijah said to Elisha, “Ask what I shall do for you, before I am taken from you.” And Elisha said, “Please let there be a double portion of your spirit on me.” 10 And he said, “You have asked a hard thing; yet, if you see me as I am being taken from you, it shall be so for you, but if you do not see me, it shall not be so.”

Elisha had proven himselfto be a faithful servant to Elijah.  He followed Elijah whereverhe went from Gilgalto bethel, to Jerichoto the Jordanriver and did not leave his side.  He watched the man of God as he called down firefrom heaven upon the soldiers of Ahaziah. (another great story)

He learned about Elijah’s zealor passion that He had for the living the God. He would have also learned about God, how He is a jealous Godand will not tolerate His people going after idols.

Elishawould have learned these lessonsand so many more by being with one of the most powerfulmen of Godthat walked this earth.

To reward Elishafor his diligence, Elijah offers to do some kind gesturefor him.  He could ask anything, and if it was in Elijah’s ability, then it would have been done. But Elisha’s request was beyondElijah’s control, it was something that only God can do.

He prays for a double portionof Elijah’s spirit to be upon him.  Meaning he wanted to be able to operatein the powerin which Elijah operated, doing the same thingsthat he did and even more.

He was wanting to be empowered to fulfillthe calling of Godthat was upon his life.  His request was not a selfish request.  He was not just wanting power for the sake of being powerful.  But rather his heart was in alignmentwith what God had alreadytold Elijah.

If Elisha was to be Elijah’s replacement, then he would need to operate under the same powerand authority, if not more, that Elijah operated in.

14 Then he took the cloak of Elijah that had fallen from him and struck the water, saying, “Where is the Lord, the God of Elijah?” And when he had struck the water, the water was parted to the one side and to the other, and Elisha went over. 15 Now when the sons of the prophets who were at Jericho saw him opposite them, they said, “The spirit of Elijah rests on Elisha.”

Though Elijah was taken up to be with the Lord, His legacy livedon.  The mantle was passedto Elisha; Elijah’s work would continue.

It was Elisha who was to carry the torchand purge Israelof their idolatry. But it was Elijah who had empowered Elishato do so. How does this relate to our lives today?

Leave a Godly Legacy by Setting the Example

What exampleare you setting for those coming behind you?  If someone were to follow your example would they make an impactfor the kingdom of God?  (Is the way you are handling quarantine, good?)

Who are you investing in? Are they diligently using what has been entrusted to them?  Is it time to move on to someone who will be found diligent? (Right now you are surrounded by kids, whom you can train)

Leave a Godly Legacy by Empowering Others

Jesus empoweredHis disciples.  He released themto go and lay handson the sick and that they would recover.   Elijah empowered Elishaby passing on the mantle (authority)

Are we teaching them that they have the power of God livingin them through Christ Jesus, to be able to overcome wickedness, cast out demons and even confront the powers of darkness? 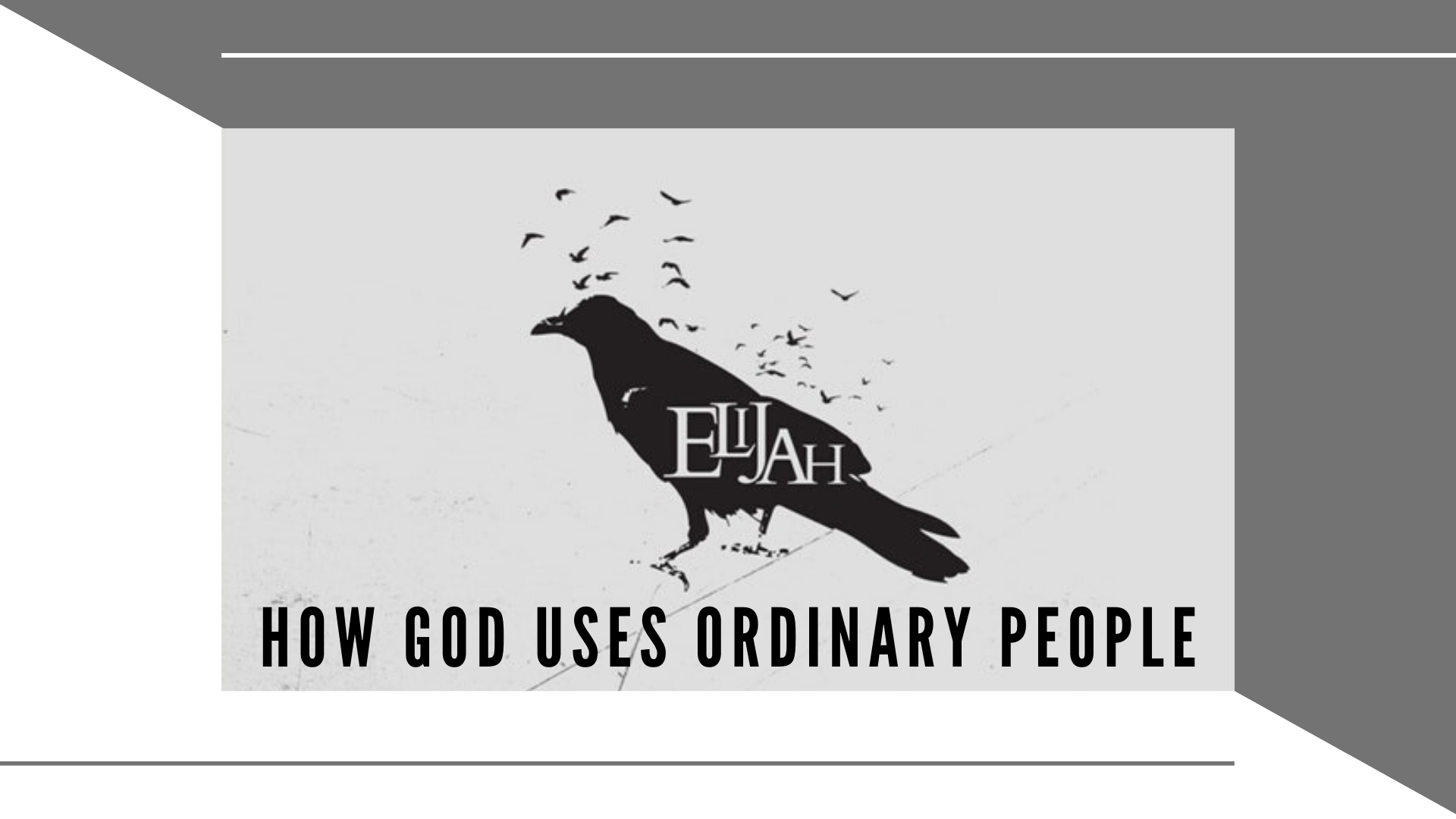 How To Pray Powerful Prayers

God is in Control