To recapon some of the things we talked about so far in this series:

We have talked about satan’s planto underminewhat God has decreedin your life regarding, sin, the familystructure, your roleas a believer and even the way that you stewardyour resources.

For example, God says sexual immoralityof all kind is sin, but the world says “as long as it makes you feel goodthen do it.”  Some would even say “just follow your heart.” We know that is not goodadvice because the bible informs us that:

Jeremiah 17:9   The heart is deceitful above all things, and desperately sick; who can understand it?

3 For though we walk in the flesh, we are not waging war according to the flesh. 4 For the weapons of our warfare are not of the flesh but have divine power to destroy strongholds.

15 Do not lovethe worldor the things in the world. If anyone loves the world, the love of the Father is not in him.

Jesus gives the command“do not love the world or the things in the world.”

Love- (in this sense) to take pleasure in the thing, prizeit above other things, be unwilling to abandon it or do without it.

Those things of this world are hollowand frailand momentary.  While they might stir desire, they seduce us from Godand are obstaclesto the cause of Christ.  Jesusis to be our treasure.

It is meaninglessto say I love God, but I don’t love what God loves.  If we say we love God then we must love what He lovesand despise what He despises.

John the Evangelist categorizes all things pertaining to the world in 3 categories:

Let us face it, we have all been temptedin at least oneof these categories at some point in our lives if not all three.  Jesus was also temptedin all three categories while He was in the wilderness.

It is when you placemore value on the feelingor the false hopethat you get from sinrather than on God’s presencewhich truly satisfies us.

What is at stake if we do not war against temptation?

The legacythat you leave behind, how you will be remembered by othersand the impactthat you made on othersis at stake.  Consequently, generationscoming behind you are at stake if you don’t overcomethe temptation.  How many times have we seen men who are alcoholics never dealwith that temptationrather they pass those habitson to their children and they too become alcoholics.

But more importantly, Eternity is at stake.  John says if you love the world, you will perish with the worldbecause the world is passing away.  But if you love Godinstead of the world, His wayswill be a joyrather than a burdenand therefore you will live with God forever.

That is why we should be storing up treasures in heaveninstead of on earth where moth, rust corrupt.

But as you well know the temptationto give in to the desiresof the flesh, or the lust of the eye, or even the prideof life is a very real temptation.   Often, we tend to love the thingsof this world, more than we love God.

What should I do if I have given in to temptation?

First off know that you are not alone.  The bible is filledwith menwho loved God, but who fellinto temptation.

Look at Samson.  He was a man that was called of Godto deliverIsrael from the hand of the Philistines.  More importantly he was a Naziritewhich meant he was dedicated to the Lordand that he had made a vowto never cut his hair, nor drink any alcoholicdrink nor was he to touchany unclean thing,.  It was a special vow which only a fewwere called to.

But Samson had a weakness.  He was a man driven by the lust of his flesh.  He found himself entangledwith philistinewomen, as well as prostitutes.  His lust eventually ledto his demise.

As the story goes, one of these women named Delilah, trickedSamson into revealing the sourceof his strength.

15And she said to him, “How can you say, ‘I love you,’ when your heart is not with me? You have mocked me these three times, and you have not told me where your great strength lies.” 16And when she pressed him hard with her words day after day, and urged him, his soul was vexed to death. 17And he told her all his heart, and said to her, “A razor has never come upon my head, for I have been a Nazirite to God from my mother's womb. If my head is shaved, then my strength will leave me, and I shall become weak and be like any other man.”

18When Delilah saw that he had told her all his heart, she sent and called the lords of the Philistines, saying, “Come up again, for he has told me all his heart.” Then the lords of the Philistines came up to her and brought the money in their hands. 19She made him sleep on her knees. And she called a man and had him shave off the seven locks of his head. Then she began to torment him, and his strength left him. 20And she said, “The Philistines are upon you, Samson!” And he awoke from his sleep and said, “I will go out as at other times and shake myself free.” But he did not know that the Lord had left him. 21And the Philistines seized him and gouged out his eyes and brought him down to Gaza and bound him with bronze shackles. And he ground at the mill in the prison.

Temptationwill always seem promisingat the beginningbut will eventually end up taking you to placeswhich you do not want to be.

But because of his burning lustof the flesh, he was willing to compromise his identityas a Nazirite for the pleasuresof sin.  He had yieldedto the lust of his fleshto the point in which he could no longer discernthat the Lord had lefthim.  As a result, he stood no chanceagainst the philistines on his own strength.

Sin will do that. The more you yieldyourself to it, the less sensitiveyou are to the voice of the Lord.  You will begin to even justifyyour sin.  However, The Lord will bearwith your disobediencefor only so long.  Eventually the Lord will turnyou over to your debased mind.

28 And since they did not see fit to acknowledge God, God gave them up to a debased mind to do what ought not to be done.

You will find yourself trying to fight your battles apartfrom the strengthwhich the Lordprovides. Samson thought hewould goout as before and overcome the philistines, but this time he lackedthe powerof God.

We need God’s powerwhich is attained through the blood of the Lamb, to overcome our spiritual enemy.

11 And they have conquered him by the blood of the Lamband by the word of their testimony, for they loved not their lives even unto death.

They loved nottheir lives, or the thingsof this world.  I like what begins to happen in verse Judges 16:22.

22But the hair of his head began to grow again after it had been shaved.

Samson would die as a prisonerof the philistines, but Samson gets one thing rightbefore he died.

“O Lord God, please remember me and please strengthen me only this once…

Samson’s life and death points to our weaknessesand our inabilityto save ourselves, we need a divinesavior.  His name is Jesus.

But eventually Samson’s hair grew backand he rememberedwhere his helpand his strengthcame from, it came from the Lord.  Though he failed at being Israel’s savior, The Lord Godwould not failwhen it came to keeping His promiseto delivering His people.  He is a better savior!

The Lord grants Samson’s request, showing that his prayer was in linewith the will of God.  As a result, 3000of the philistine rulers were killed, as the place they were assembled was brought down by Samson.

The story of Samson is a bittersweet.

It’s bitterbecause you wonderwhat Samson could have becomehad he not been overcome by temptation. It’s sweet because Godhad shown His unmerited graceupon him and used himone last time to overcome those philistine rulers, despitehis shortcomings.

God is in the processof turning that which the enemy meantfor evil for our good.

But to answer the question “what should I do if I have given into temptation?”

8If we say we have no sin, we deceive ourselves, and the truth is not in us. 9 If we confess our sins, he is faithful and just to forgive us our sins and to cleanse us from all unrighteousness.

Renounce demonsthat you have allowed to enter

Break generationalcurses that have been passed on from generation to generation,

Samson was a Nazirite, His strengthcame from the Lord, the maker of Heaven and earth.  Upon his humilityand repentance his identity was restoredas man of God.

You are not your past sins.  That is not who youare, that is what you did.  Now you are a childof God, the righteousness of Godthrough Christ Jesus our Lord.

How do we make war against temptation?

When Jesus was temptedby the devil to turn the stones into bread, keep in mind that Jesus had been fastingfor 40 days and nights, He was hungryit was tempting for Jesus.  But rather than yielding to that temptation He rebukes the devilwith these words.

“It is written, “‘Man shall not live by bread alone, but by every word that comes from the mouth of God.’”

He made war against temptationby using the word of God.  The Word of God is the final authority.

In other scriptures Jesus tells his disciples to watchand pray.

Watch and pray that you may not enter into temptation. The spirit indeed is willing, but the flesh is weak.”

Watch- give strict attentionto, be cautious, active:  to take heedlest through remissness and indolence some destructive calamity suddenly overtakes one

Do not be like Samsonand allow the ever-increasing draw of temptation to pull youaway from being the man or woman of God that He has called you to be.  Instead handle temptation like Jesus handledit, by staying on guard, being watchful, Rebuke it don’t entertain it.

Do not givethe devil a footholdin your mind.  Do not entertainhis lies.  Know this:

13 No temptation has overtaken you except such as is common to man; but God is faithful, who will not allow you to be tempted beyond what you are able, but with the temptation will also make the way of escape, that you may be able to bear it.

He will give you a way outevery time that you are tempted so that you can bear it.   Meaning so that it does not overcome you. 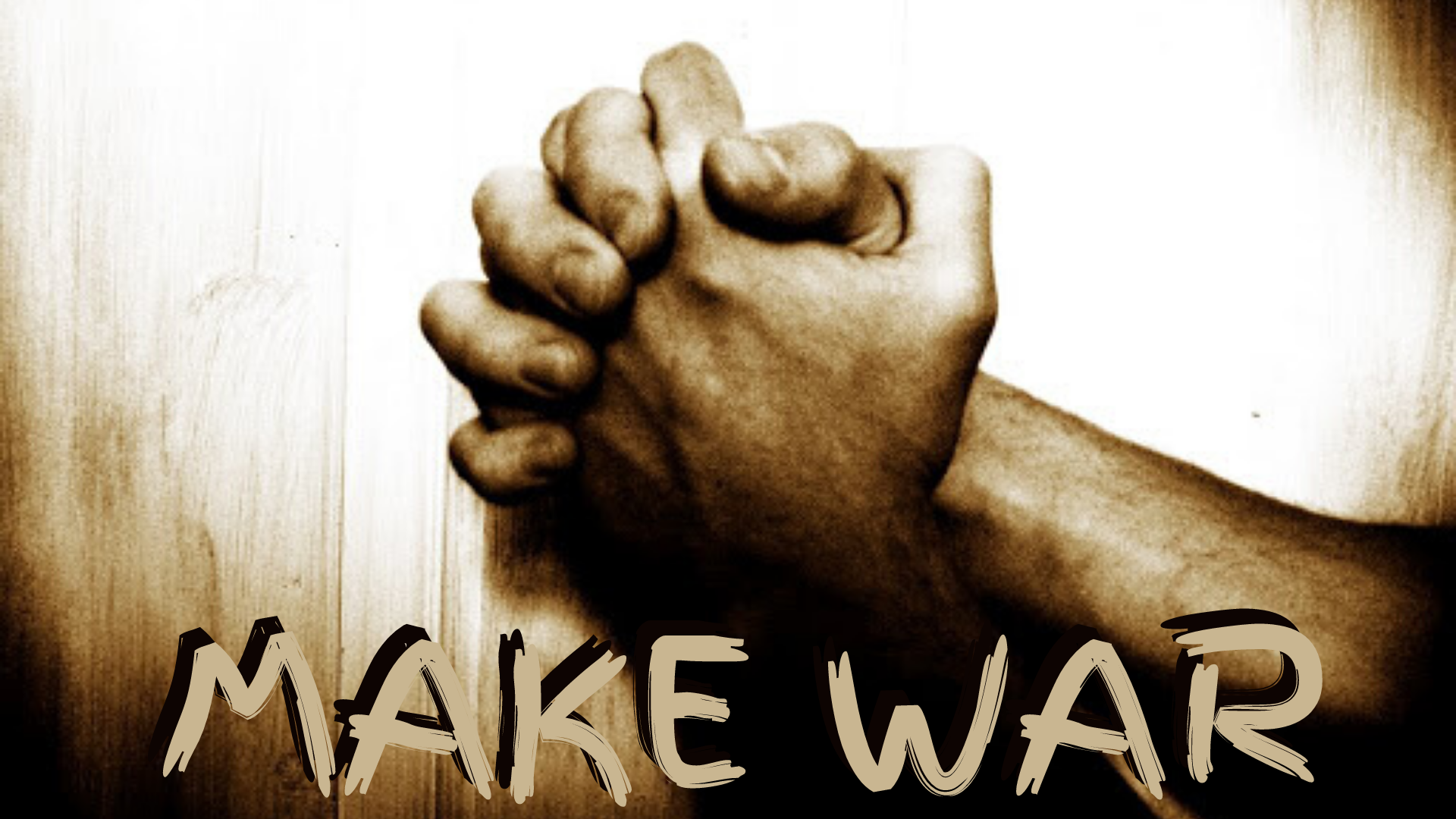 You Must Be Born Again

Fight For the Church