Are You a Slugger or a Sluggard?

Title: Are you a Slugger or a Sluggard?

(ESV) Proverbs 6:6 Go to the ant, O sluggard; consider her ways, and be wise.

(MSG) You lazy fool, look at an ant. Watch it closely; let it teach you a thing or two.

╂ What is a sluggard?

Merriam Webster defines sluggard as a habitually lazy person. Meaning they had developed habits and/or lifestyles of laziness.

To paint a better picture of a sluggard we will read a few of these proverbs.

Proverbs 6:9 How long will you lie there, O sluggard? When will you arise from your sleep?

From this we learn that a sluggard loves laziness so much he/she does not want to do anything. They waste the day by staying in bed or on the couch doing nothing.

Proverbs 10:26 Like vinegar to the teeth and smoke to the eyes, so is the sluggard to those who send him.

From this verse we learn that lazy people irritate those who are diligent workers just as smoke is irritating to the eyes. Oh, how true this is!

Proverbs 20:4 The sluggard does not plow in the autumn; he will seek at harvest and have nothing.

From both of these verses we learn that the sluggard will crave things but will have nothing. Mainly because he/she did not put in the work beforehand therefore, they will not have harvest.

From these verses we learn that sluggards are delusional, they make up threats that do not exist. All that idle time spent in bed or on the couch has corrupted their mind and now prevents them from thinking rationally.

Laziness turns the mind into a master of self-deception or a skilled rationalizer. You mind is meant to serve your creativity.

Sluggards go nowhere much like a door on a hinge goes nowhere, it just swings back and forth. They not only go nowhere, but they make-up excuses why they don’t go anywhere or do anything. Mainly because of some threat that exist in their minds due to idleness. They are delusional.

(TLB) Proverbs 16:27 27 Idle hands are the devil’s workshop; idle lips are his mouthpiece.

What is more tragic is that the sluggard thinks himself to be wise for doing this, even wiser than seven other people who think reasonably. Laziness makes us uncorrectable. He is not affected by the counsel of the wise. He has become utterly diluted.

As we can see being a sluggard means to have self-destructive behavior. While dealing with a sluggard may be irritating and may even provoke some to anger, they are really hurting themselves, their families, and generations to come after them, by establishing patterns of laziness. You can be certain these patterns will get passed on to the next generation and so on.

The opening part of our theme verse says to go to the ant and let it teach you a lesson. There are many reasons why King Solomon would direct us to an insect that seems small and insignificant such as the ant.

Ants can carry somewhere between 10-50 times their body weight. They can experience forces of more than 3,000 times their own body weight without breaking. They build & clean the nest as well as gather food. They will gather food during the spring and summer months and store it in their chambers for the cooler and colder months.

· Sense of Community & willingness to work together

One of the most remarkable things about ants is they have a very close sense of community and their instincts tend to be geared toward working together to help bring food and protect their colonies. Ants have been shown to work together as a team:

to break apart large food elements to bring down into the nest.

to create bridges and tunnels with their own bodies to shelter the rest of the colony as it rushes out to find food.

Ants work together to attack threats from people, animals and other ant colonies.

To create rafts to ensure the colony survives flooding.

The workers and scouts, however, are constantly moving around and looking for food. This causes them to use up a tremendous amount of energy and they will take potentially hundreds of short naps during the course of the day to rebuild their energy.

Ants are among the most highly organized organisms in nature. Every ant has an assigned task and the entire colony works together as one living creature to keep the colony alive, protected and fed. Ants are also very clever when it comes to work. They build chambers underground to store food, to rest in and to store their eggs.

Just to recap, they are hard workers, they are in community, they work together to build the colony, they are constantly moving, and they are innovative.

Now we can clearly see why Solomon would direct us to these little creatures.

What would happen if all the members of the body of Christ followed the ant’s example and would continuously work hard together, being innovative in using their abilities, to build not a temporary colony but an everlasting kingdom of God.

This is the opposite of being a sluggard. In fact, this is what the sluggard is missing out on.

· He/she does not leave the bed or couch and so therefore misses out on being in community.

· Because He/she is not in community, they do not have a sense of purpose or a sense of urgency. They do not feel connect to the vision, so they do not work hard, nor do they move continuously toward the vision.

· Because they are not working hard, they are not using their mind to think creatively, but instead come up with all sorts of delusional thinking.

The apostle Paul warns the church at Thessalonica to not be sluggards by avoiding idleness.

6 Now we command you, brothers, in the name of our Lord Jesus Christ, that you keep away from any brother who is walking in idleness and not in accord with the tradition that you received from us.

Paul is so adamant about working diligently for the Lord that he urges the believers to stay away from people who are idle. He also said in another letter:

1 Corinthians 15:33 Do not be deceived: “Bad company ruins good morals.”

The idea is that if you hang around sluggards then you too will become sluggish.

7 For you yourselves know how you ought to imitate us, because we were not idle when we were with you, 8 nor did we eat anyone’s bread without paying for it, but with toil and labor we worked night and day, that we might not be a burden to any of you. 9 It was not because we do not have that right, but to give you in ourselves an example to imitate. 10 For even when we were with you, we would give you this command: If anyone is not willing to work, let him not eat. 11 For we hear that some among you walk in idleness, not busy at work, but busybodies. 12 Now such persons we command and encourage in the Lord Jesus Christ to do their work quietly and to earn their own living.

Here we see another problem with being idle or being a sluggard; It creates busybodies.

Busybody- to bustle about uselessly, to busy one’s self about trifling, needless, useless matters; inquisitive (nosy) about other’s affairs.

Thankfully there is hope for anyone dealing with laziness. Christ died to overcome your laziness.

11 For the grace of God has appeared, bringing salvation for all people, 12 training us to renounce ungodliness and worldly passions, and to live self-controlled, upright, and godly lives in the present age,13 waiting for our blessed hope, the appearing of the glory of our great God and Savior Jesus Christ, 14 who gave himself for us to redeem us from all lawlessness and to purify for himself a people for his own possession who are zealous for good works.

Hopefully you can see laziness as a form of ungodliness. We are to renounce (forsake) ungodliness and worldly passions. It may be a passion of yours to be idle or lazy, the scriptures say Jesus came to redeem you from all lawlessness (including laziness) therefore we must forsake such behavior.

Furthermore, we are to be zealous (eager) to do good works.

╂ What is considered Good work?

Good Work- any product whatever, anything accomplished by hand, art, industry, or mind

10 Whatever your hand finds to do, do it with your might,

As you work hard, your availing yourself to the grace of God.

1 Corinthians 15:10 But by the grace of God I am what I am, and his grace toward me was not in vain. On the contrary, I worked harder than any of them, though it was not I, but the grace of God that is with me.

Paul was a Slugger: one that strikes hard or with heavy blows: such as a prizefighter or a hard-hitting batter in baseball. He says God’s Grace produced work in me, therefore I worked harder. As you apply your will to do a certain task know that it is God at work in you.

1 Corinthians 3:9 For we are God's fellow workers.

Find your niche, that thing you do love to do and do it with all of your might.

(ESV) Proverbs 6:6 Go to the ant, O sluggard; consider her ways, and be wise.

· Are you a hard worker or do you hardly work?

· Are you in constant community?

· Are you working together with the body of Christ to build his kingdom?

· Are you using the creativity that God has given you to your fullest potential?

· Are you a slugger or a sluggard? 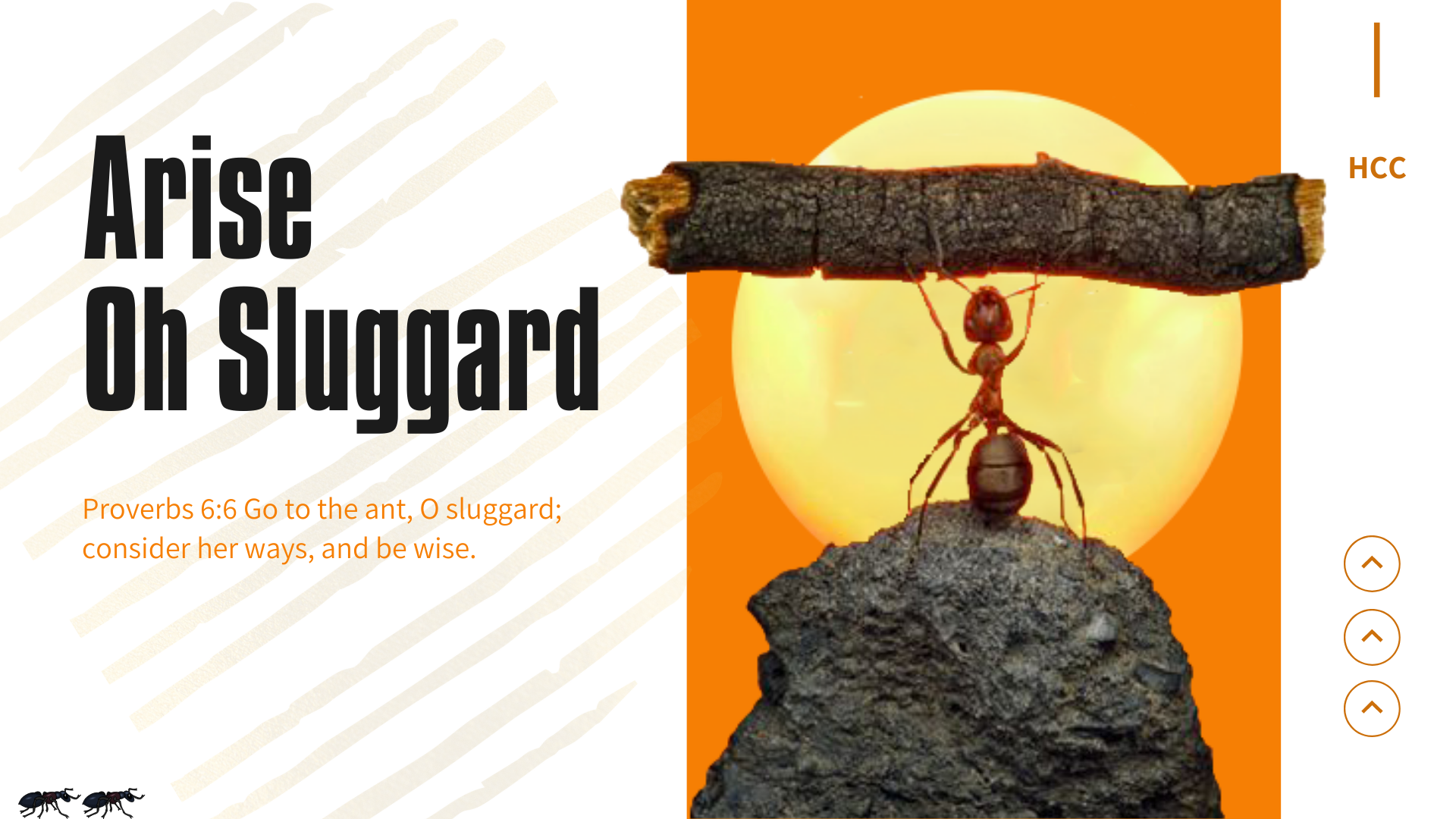