I Am Worthless and Have Nothing to Offer

(lie #6) I am worthless and have nothing to offer

Surely those who are more successful than we are can be an inspirationto us to work harderand put in more effortand gain more knowledge and become the best that we can be.

But let us not allow that which is supposed to be an inspirationbring about devastation.  It is an impossiblething to be like everybodyelse.  The reason is because God did not create you to be like everyone else.  He created you to be you.

What I have andwhat I have becomedoes not make me less of a personthan someone who has more and who has become someone great.  Because when we only associate valueto our lives by the thingswe have or by our own personal achievements and abilities, we will be devastatedwhen those things are takenaway from us.

Which leads us to our story today.

We want to talk about a manwhose life was filled with many upsand many downs.  He had experienced many victoriesbut just as many defeats.  Though He was a man after God’s heart, he would experience this feeling of worthlessness.

His name was David.

Just to give a brief historyof what had happened to David up to this point in time:

David had the favor of Godupon his life from an early age.  He was chosen by God and anointedby the prophet Samuel to become the next kingof Israel.

King Saulbeing the first king of Israel did not likethe idea of David becoming king, as he thought his son Jonathonshould be the next king.   But because of Saul’s disobedienceGod had told him that the kingdom would be taken away from him and his family and that it would be given to a man after God’sheart.  That man was David.

David and Jonathon were best friends, and Jonathon was willing to help David become Kingeven though it meant giving uphis rightful spot as king.

This of course infuriated King Saul.  At the same time David was a mighty warriorand was very successfulon the battlefield. David had killed one of the most valiant philistine warriors, a giant named Goliath.  Besides that, every missionthat Saul had sent David on, David was victorious.

The people began to sing his praises.

“Saul has struck down his thousands,
but David his tens of thousands!”

This further infuriatedSaul and in his rage, from that day forward he plotted to kill David.  In one attempt, Saul hurled a javelinat him while David was playing some mood musicfor king Saul.  Not long after this incident David finds himself on the run for his life.

During this seasonof being on the run from King Saul, David hears that the Philistines are fightingagainst the people of Keilah.  David consultsthe Lord for wisdom, and he liberated Keilahfrom the hands of the Philistines.

Saul soon found outthat David was in Keilah and pursues him.  David is made awareof Saul’s efforts and inquires of the Lord again, to see if the people of Keilahwould turn David over into the hands of king Saul.  The Lord tells him that they would. So again,he is on the run.

The very people that David had risked his life forwere going to turn on himand hand him over to king Saul.  Everything that David had endured up to this point was enough to break him.

I would now like to read a Psalm of Davidwhich many scholarsbelieve was written during this timeof distress. It is a Psalm which depicts him as neither a man of great skillnor a great warriorbut a brokenman needing Godto intervene in his life.

9Be gracious to me, O Lord, for I am in distress;
my eye is wasted from grief; (This infers that he had been crying a lot)
my soul and my body also.
10 For my life is spent with sorrow,
and my years with sighing;
my strength fails because of my iniquity, (possibly the guilt he feltfrom unintentionallyleading Saul’s army to the priest Ahimelech, who had helped David when he fled from King Saul.  Consequently, he was among the 85 prieststhat King Saul killed that day.
and my bones waste away.

11 Because of all my adversaries I have become a reproach,  (a condition of shameand disgrace)
especially to my neighbors,  (to those closest to him, Saul had made him a reproach in the kingdom)
and an object of dread to my acquaintances;
those who see me in the street flee from me.
12 I have been forgotten like one who is dead;

No one was singingany more how David killed his ten- thousands, no one was bragging on his musical abilities, no one was celebratinghim as a war hero, rather they treated him as a nuisance.
I have become like a broken vessel.

(NET Version) I am regarded as worthless, like a broken jar

What happenedto the great man of Godwho we all grew up to know as a man after God’s own heart?  Here he is facing one of the darkest hoursof his life;

It is incredibleto me that a man such as David could ever be regarded as worthless.  There was so much potentialinside of him.  He would become one of the greatest kingsthat Israel would have.  He would become a king who is talked about todayin sermons around the world over three thousandyears later, and yet he considers himself a broken vessel, unfitfor any good use, worthless.

13 For I hear the whispering of many—
terror on every side!—
as they scheme together against me,
as they plot to take my life.

I hear the whisperingsof many. People were talking, running their mouthsand saying things they had no businesssaying.  Yet David took it to heart, and he listenedto things he hadno business listeningto.  He believed the liesof the enemy, that he was a reproach, that he was washed up, that he was broken, worthlessand unfitfor any good use.

Before you know it the devil has usright where he wants us paralyzedby fear and insecurity.  We don’t do anything greatfor God because we believe the whisperingsof many.  We think we are worthless, that our life is not as valuableas another.

David was royaltyfor crying out loud, but he sees himself as a worthless broken vessel.  David was a man of so much potential, so many giftings, but if he did not see it in himself, if all he saw was “worthless” he would have never become the Kingthat we all know.

14 But I trust in you, O Lord;
I say, “You are my God.”
15 My times are in your hand;
rescue me from the hand of my enemies and from my persecutors!

David was in a very a pivotal placein his life.  He desperately neededto get out of that paralyzed state in which he believed himself to be worthless, so that he could become King of Israel and a man after God’s own heart.

Perhaps you deal with these same feelings of worthlessness.  Your brokennesshas led you to feel worthless.  Because of what happened to you, or because of the whispers of othersyou have come to conclude that you are worthless.  In doing so your full potential remains undiscoveredand the plans and purposesof God for your life remain unachieved.

If he would truly understand the thoughtsthat God has toward him and that in Him alone he can findvalue and worth regardless of his brokenness, regardless of the whispersof others, he would be unstoppablein every aspect of life and would have a tremendous amount of successwhatever he would do.

Perhaps you also struggle with feelingsof worthlessness.  You have believedthe many whispers.  Perhaps these whispers had led to thoughts which question Godand the way that he formed you.  Why did you make me like this, you may have asked? Why did you not make me more like soan so.  Why could I have not been born in that familywith their income level? Why am I worthless?

“Woe to him who strives with him who formed him, a pot among earthen pots!
Does the clay say to him who forms it, ‘What are you making?’ or ‘Your work has no handles’?

Who are we to question our creator?

To feel worthlessis to lack understandingthat God has created you very uniquelyfor His very own special purpose.  To let those feelings of worthlessness, take precedence in your life is to deny what Godhas declaredabout you and to accept what the enemy has said about you.

You can be free from those feelings.

You can know with assurance that Christ has put a tremendous valueon your life.

If you think about a paintingwhat makes it valuableis the price that a buyer is willing to payto have.   (example cruise ship)

Jesus paid the highestpricea person could pay for the tapestry of your life.  He paid with His own life.

That is how valuable you are to Him.  You were bought with a high price.

Key points about the illustration

1006 BC David flees to Nob and is helped by Ahimelech

1000 BC David is anointed King of Judah

993 BC David is King of Israel

976 BC Absalom murders Ammon, who had raped his half-sister, banished from the kingdom for 3 years

969 BC Absalom revolts against the kingdom 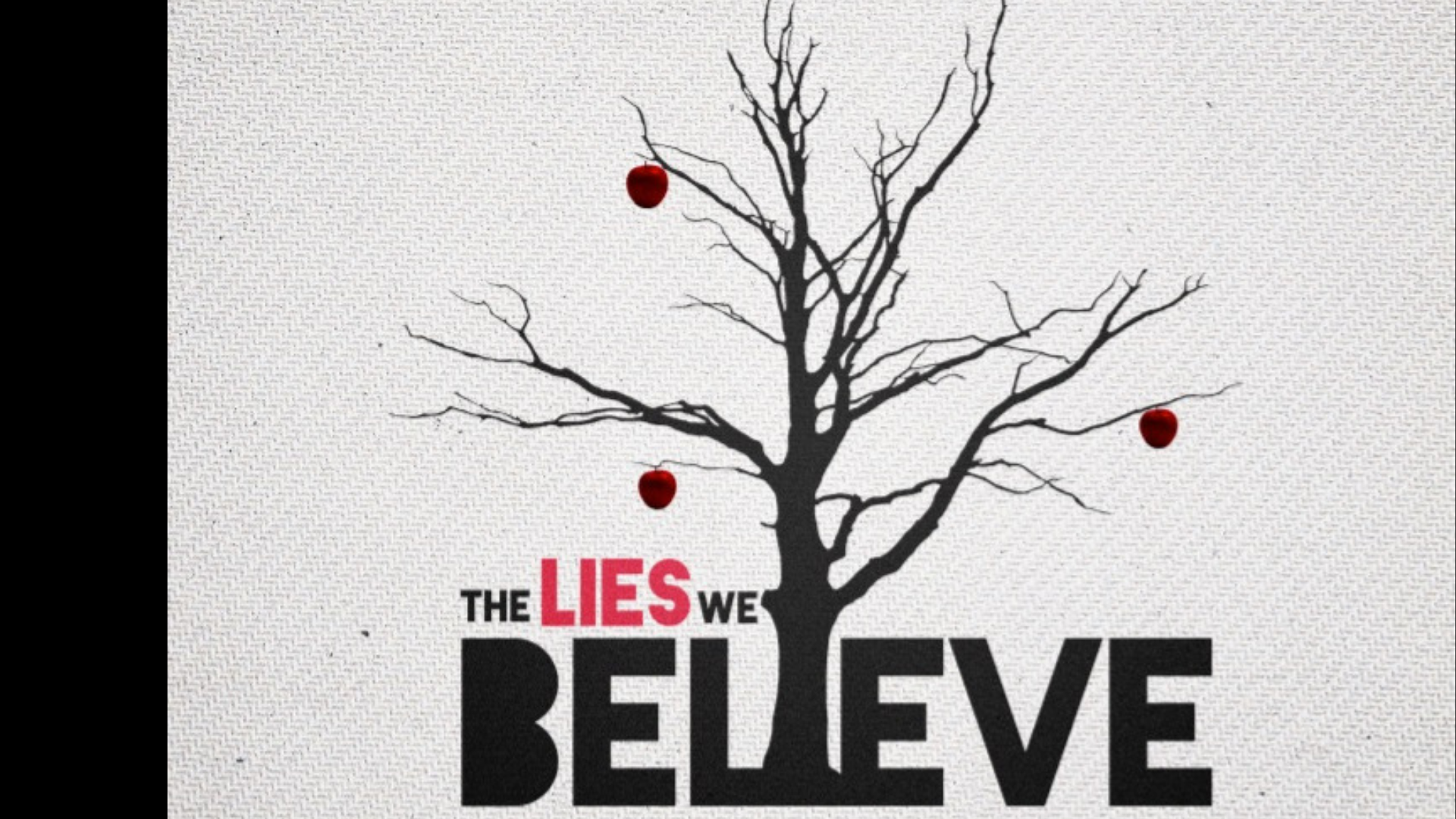 More in The Lies We Believe

Unity is Not Important

What I Do Does Not Affect Anyone

God Helps Those Who Help Themselves